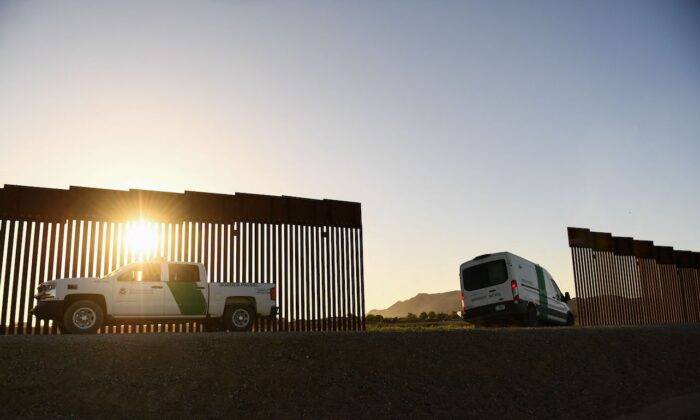 A Border Patrol agent drives a van between a gap along the border wall between the United States and Mexico in Yuma, Ariz., on June 1, 2022. (Patrick T. Fallon/AFP via Getty Images)
Immigration & Border Security

Most claims not dismissed, including border wall claim
By Nathan Worcester

A federal judge in Washington says a lawsuit that relies on the National Environmental Policy Act (NEPA) to challenge Biden administration actions on immigration can proceed, marking an unmatched, if still early, success for the use of environmental law against illegal immigration.

U.S. District Judge Trevor McFadden, a Trump appointee, ruled on Aug. 11 (pdf) that his court has jurisdiction over the case.

“I think people would support the efforts to stop ignoring the massive environmental consequences of immigration,” Julie Axelrod, director of litigation for the Center for Immigration Studies, said in an Aug. 30 interview with The Epoch Times.

Axelrod filed an amended complaint (pdf) on behalf of the plaintiffs. A previous NEPA lawsuit from the Center for Immigration Studies was rejected for lack of standing, first by the Southern District of California and then by the 9th Circuit Court of Appeals.

One plaintiff in the D.C. lawsuit, cattle rancher Chance Smith, lives near Douglas, Arizona, in an area that his family has called home since the 19th century.

The shift to Biden from Trump “caused the number of crossers he personally sees crossing the ranch to increase to eight or nine times [what] it was before,” according to the complaint.

Smith said those border jumpers degrade the land, leaving behind trash or even buried drugs and guns.

“He [Smith] needs to bring a pistol at all times, even though he would prefer not to. However, he knows he is under threat of trouble from cartel members at all times when the border is not under control by law enforcement,” the complaint reads.

NEPA and the Border

Signed into law by then-President Richard Nixon, NEPA was a milestone in protecting nature from damage by the federal government.

“If NEPA should apply to any government policy, it should be to federal policies that induce population growth,” the complaint reads.

The suit cites the direct effects of unchecked illegal immigration on the border, as experienced by Smith and others. It also refers to the broader negative effects of immigration-driven population growth, including urban sprawl, farmland loss, reduced biodiversity, and strain on water resources.

The government’s motion to dismiss (pdf) the lawsuit states that the plaintiffs lack standing. It claims that the complaint hinges on “highly speculative and generalized grievances related to the effects of population increases,” noting that none of the alleged harms can be linked to changes made by the Biden administration.

It also argues that many of the actions that the lawsuit challenges fall under agency discretion.

McFadden ruled that Smith, one of the plaintiffs, has standing, stating that the injuries he claims aren’t excessively speculative “if they can be proven true or false later in the litigation.”

He dismissed just two of the plaintiffs’ nine claims.

The surviving claims include challenges to State Department actions on refugee resettlement, as well as other policy changes to refugee detention, fines, and related actions.

Notably, McFadden’s ruling didn’t dismiss a claim against Biden’s border wall policies. That sets the suit apart from a recent ruling on Arizona’s NEPA case (pdf), which found that the Trump administration’s NEPA waiver for the border wall could help justify waiving NEPA analysis of a halt to border wall construction.

She thinks the plaintiffs and defendants will likely both file motions for summary judgment.

“The case will proceed to litigate the merits of whether the Biden administration’s actions on immigration have had significant environmental impacts, and if those impacts have been felt by the plaintiffs in this case,” Axelrod wrote in an Aug. 18 article on the ruling.

The use of environmental law against changes to immigration policy is relatively novel. Yet, environmentalists have long worried about the potential impact of rapid population growth, including growth driven by mass immigration.

NEPA itself dates back to 1970, a period when overpopulation topped the list of worries for many environmentalists.

As the suit points out, the original congressional declaration of national environmental policy calls population growth one of the “profound influences” driving the need for a new law.

That declaration also states that the federal government bears responsibility for “[achieving] a balance between population and resource use which will permit high standards of living and a wide sharing of life’s amenities.”

NEPA was passed just half a decade after an even more transformative law: the Immigration and Nationality Act of 1965.

“The bill will not flood our cities with immigrants. It will not upset the ethnic mix of our society. It will not relax the standards of admission. It will not cause American workers to lose their jobs,” former Sen. Edward Kennedy (D-Mass.), a major supporter of the legislation, testified before an immigration subcommittee.

Yet, in the following decades, mass immigration, both legal and illegal, has driven the majority of population growth in the United States.

Demographers expect that trend to intensify. Pew Research projects that future immigrants and their descendants will cause 88 percent of the population increase in the U.S. between 2015 and 2065.

The Center for Immigration Studies has an even higher estimate. They think immigration will drive 95 percent of population growth by 2060.

In recent decades, however, immigration has become a third rail for environmentalists.

As recently as 1989, the Sierra Club maintained that “immigration to the U.S. should be no greater than that which will permit achievement of population stabilization in the U.S.”

Mega-donor David Gelbaum may have led the Sierra Club to change its tune. During the mid-1990s, the businessman told the group’s director that “if they ever came out anti-immigration, they would never get a dollar from [him].”

He later donated more than $100 million to the organization.

The group’s shift prompted some Sierrans to form a splinter organization, Sierrans for U.S. Population Stabilization (SUSPS), that opposes unchecked immigration, as well as racial bigotry aimed at immigrant groups.

A SUSPS insider told The Epoch Times that multiple founding members were unaware of any efforts by the Sierra Club to use NEPA or other environmental laws against illegal immigration in earlier decades.

The Sierra Club and Department of Homeland Security didn’t respond to a request for comment by press time. The departments of Justice and State declined to comment on the lawsuit.