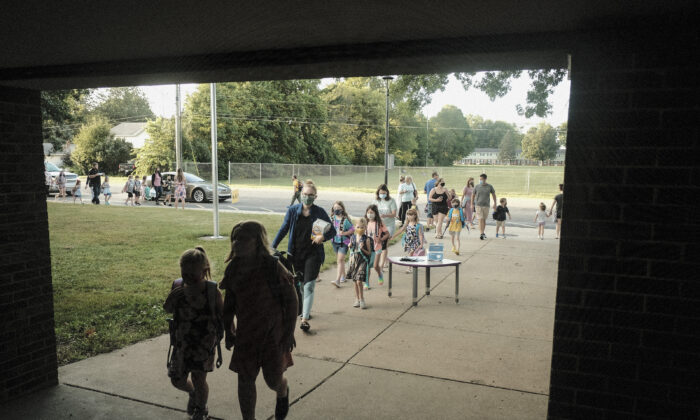 Students return for the first day of the school year at an elementary school in Michigan on Aug. 30, 2021. (Matthew Hatcher/Getty Images)
Michigan

The Mackinac Center Legal Foundation partnered with Bursch Law to file a lawsuit alleging Michigan’s restriction on the use of public funds to pay for private education is unconstitutional.

Five Michigan families and the Parent Advocates for Choice in Education (PACE) Foundation, a nonprofit supporting the rights of Michigan parents to provide educational opportunities for their children, joined the lawsuit after conventional public schools frustrated them after the COVID-19 pandemic. Plaintiff Jessie Bagos’s school only provided virtual school for her young children for much of the last school year. She wanted other options for her twin boys starting kindergarten instead of sitting in front of a screen.

“To have the option to choose schools would be life changing,” Bagos said in a statement. “For everyone, not just us. Hopefully this lawsuit can help with that.”

The lawsuit cites the U.S. Supreme Court’s 2020 ruling in Espinoza v. Montana Dept. of Revenue, arguing it paved the way for more families to tap programs that fund the choice of K-12 private or public schools.

“[I]t is unconstitutional for a state to use a Blaine Amendment to force religious schools and families attending those schools to ‘divorce’ themselves ‘from any religious control or affiliation’ to ‘be eligible for government aid,’” the lawsuit says.

The lawsuit, filed in the U.S. District Court for the Western District of Michigan, seeks to enable Michigan families to use MESP funds to help pay for private education, including private school tuition. The lawsuit says Michigan’s “restrictive” amendment makes the state an outlier.

“If we can knock down this barrier, the whole playing field changes,” Mackinac Center Director of Education Policy Ben DeGrow said in a statement. “The shutdown and disruption of many public schools since the spring of 2020 shows just how important it is that families across Michigan can have the flexibility of using their education funds to provide their children with the best opportunity to succeed.”

“It’s time to end religious bigotry in Michigan,” DeShone said in a statement. “Federal law bars religious discrimination against parents and kids, and the state of Michigan must abandon its bigoted Blaine Amendment, too. GLEP is incredibly proud of the brave parents who stood up today to defend their kids against discrimination.”