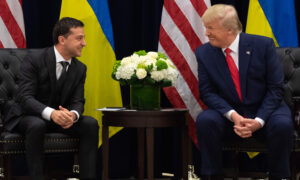 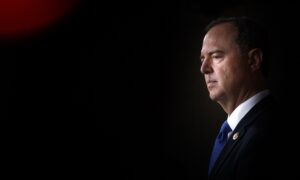 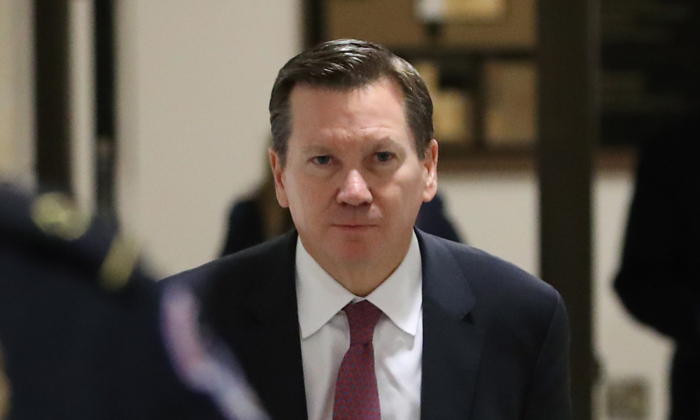 Atkinson received a complaint from a mysterious whistleblower in August that served as the basis for impeachment proceedings against President Donald Trump. Atkinson’s actions in bringing the complaint forward have raised questions, and conservative watchdog group Judicial Watch is suing for his unclassified communications.

Judicial Watch announced a Freedom of Information Act lawsuit against the Department of Justice on Dec. 3, seeking all of Atkinson’s communications relating to Trump and emails and text messages with Schiff and his staff. The suit also seeks communications referencing Hillary Clinton, Anthony Weiner, the 25th Amendment, and impeachment.

Those assertions are currently being debated in the House Judiciary Committee and could lead to an impeachment vote and subsequent Senate trial. Atkinson was at the center of events that led to congressional involvement.

At the outset, Atkinson changed internal IG policy requiring firsthand information to allow the complaint to qualify for the Intelligence Community Whistleblower Protection Act. He then recommended the complaint be referred to Congress, although acting Director of National Intelligence Joseph Maguire disagreed, and the Justice Department’s Office of Legal Counsel determined the complaint didn’t involve an “urgent concern.”

Under intense questioning from Schiff on Sept. 26, Maguire testified that the whistleblower complaint was essentially “hearsay” and uncorroborated. “This is secondhand information,” he said. Days later, it was revealed that the whistleblower had contacted Schiff and his staff before submitting the complaint to the IG’s office, about which Atkinson has denied any foreknowledge.

Rep. John Ratcliffe (R-Texas), who sits on the House Intelligence Committee, wrote about the issue on Nov. 30. When a reporter asked why Schiff has held back Atkinson’s transcript despite releasing 15 other witness transcripts, Ratcliffe wrote on Twitter: “It’s because I asked IG Atkinson about his ‘investigation’ into the contacts between Schiff’s staff and the person who later became the whistleblower. The transcript is classified ‘secret’ so Schiff can prevent you from seeing the answers to my questions.”

Carlin was Robert Mueller’s chief of staff when Mueller was FBI director, and McCord accompanied former acting Attorney General Sally Yates to confront White House counsel Don McGahn about Lt. Gen. Michael Flynn in 2017. Flynn later pleaded guilty to lying to the FBI during the Mueller special counsel investigation, though his attorney insists he was targeted to “take out” the president.

Judicial Watch also noted that FBI officials Peter Strzok and Lisa Page worked on Crossfire Hurricane, with Page being the liaison between FBI Counterintelligence and the DOJ National Security Division.

Sens. Chuck Grassley (R-Iowa) and Ron Johnson (R-Wis.) wrote to Atkinson on Oct. 2, expressing concern about intelligence community leaks of classified information that fall under his purview. The letter was a follow-up to a May 6 inquiry.

“In response to our May 6, 2019, letter, although you shared in our concern about the harms posed by leaks during the Russia investigation, you refused to confirm or deny the existence of an investigation,” the senators wrote. “We request that you show the same transparency that you and the White House have shown with respect to making the IC complaint’s allegations and supporting documentation public.”

The Ukraine whistleblower complaint was itself illegally leaked. The transcript of Trump’s phone call with Ukrainian President Volodymyr Zelensky was declassified on Sept. 25, and the complaint was made public a day later. But The Washington Post had already written about them.

To date, no one has been held accountable, and Atkinson hasn’t committed to an investigation.

Rep. Devin Nunes (R-Calif.), the ranking minority member on the House Intelligence Committee, referred to Atkinson as a member of the “deep state” after his Oct. 4 closed-door testimony led by Schiff.

“[Atkinson is] either totally incompetent or part of the deep state, and he’s got a lot of questions he needs to answer because he knowingly changed the form and the requirements in order to make sure that this whistleblower complaint got out publicly,” Nunes said.

“He’s going to have more to answer for, I can promise you, because we are not going to let him go. He is going to tell the truth about what happened.”