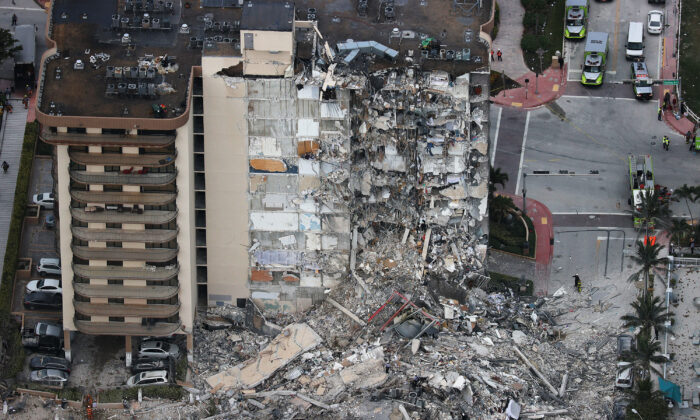 By Nicholas Nehamas
From Miami Herald

MIAMI—Three major defendants in the Champlain Towers South collapse class-action lawsuit have agreed to settle with victims for a total of $55.55 million, all paid by their insurance firms, according to a court filing.

The settlements with Becker and Morabito were announced in court last month, although the dollar amount was not disclosed.

DeSimone deciding to settle had not been previously reported. The move is significant because DeSimone is the first of the defendants associated with Eighty Seven Park to settle. The plaintiffs have partially blamed construction at Eighty Seven Park for the collapse and sued additional firms that worked on the project on Monday, as well as the tower’s condo association. (The developers of Eighty Seven Park have denied construction had anything to do with the disaster.)

“No amount of money can ever compensate the victims of this tragedy but we hope that these early settlements will help provide some closure,” Harley Tropin and Rachel Furst, lead attorneys for the plaintiffs, said in a statement. “They reflect the excellent work of the lawyers on the team who pushed these claims and negotiated these settlements.”

Several other defendants associated with Eighty Seven Park, including the development team, are continuing to fight the case.

DeSimone did not immediately respond to a request for comment Tuesday. Becker and Morabito did not admit to any wrongdoing as part of the settlement.

In the lawsuit, victims accused attorneys at Becker of “callous, reckless, and conscious disregard” for the safety of Champlain South residents and claimed that Becker “had knowledge of complaints from residents regarding the building’s condition for years before the collapse” but did nothing.

Becker released a statement Tuesday saying in part: “This settlement is not a finding of fault against Becker. The services provided by the firm were consistent with the highest standards of care. The settlement amount is based on the decision of our insurance carriers given the level of coverage carried by the firm as a responsible business. … We are pleased this matter was quickly resolved and sincerely hope the insurance settlement will bring some relief to those impacted by this terrible tragedy.”

Miami-Dade Circuit Court Judge Michael Hanzman must sign off on the agreements. The money will be paid by the firms’ insurance companies and delivered to the receiver who has taken over the Champlain South condo association. The receiver would then distribute the funds among the plaintiffs as directed by the judge. The plaintiffs include unit owners, renters and loved ones of the 98 people killed in the collapse.

A separate settlement under consideration would pay Champlain South unit owners a total of $83 million from the association’s insurance policy on the building and the eventual sale of the property. Several owners have said that sum would severely shortchange them.