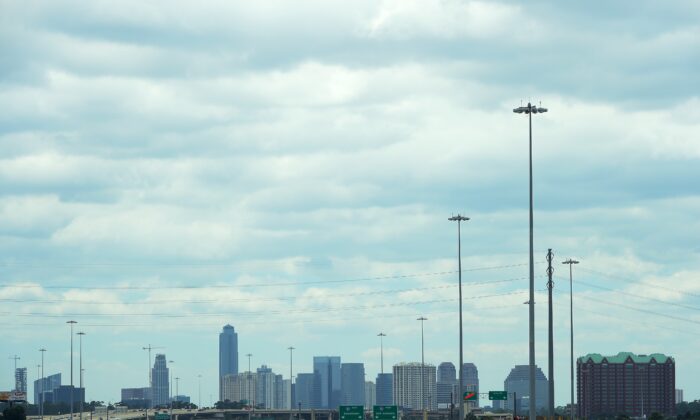 A musician is suing Houston in federal court over its extraordinarily strict regulations governing outdoor performances in the city, claiming his First Amendment rights are being violated.

The lawsuit challenging the city’s ordinance prohibiting musicians from busking, that is, playing in public for tips, was filed in U.S. District Court in Houston on Jan. 15.

Anthony “Tony” Barilla is an accomplished accordionist who plays in a three-piece cover band and has written and recorded music for National Public Radio’s nationally syndicated podcast, “This American Life,” according to the Pacific Legal Foundation (PLF), a public interest law firm headquartered in Sacramento, California, that represents him in the legal proceeding.

He wants to busk on the streets of Houston, but the city forbids performing for tips except for in the eight-block Theater District.

Barilla has a wry, self-deprecating sense of humor in defending his artistic endeavors.

“And I am well aware that any progress I have encouraged here on behalf of buskers has perhaps only insured that you are more likely to hear many more renditions of Pink Floyd’s ‘Wish You Were Here’ on the streets of our city—not necessarily a net gain for the citizenry,” Barilla writes in an op-ed in The Houston Press.

“Activism in any form can be a double-edged sword. When you work for the good of others, there’s no guarantee that those you are working for will be good.”

PLF says the law violates the First Amendment to the U.S. Constitution, which affords Barilla the right to earn extra income while engaging in free expression. The First Amendment forbids content-based restrictions on speech, which means that a government can’t shut down speech on public property solely because it may be disliked by some.

“By banishing buskers from the vast majority of public streets, Houston has harmed not only Tony’s First Amendment rights but also his livelihood by restricting his ability to practice the trade that he loves,” Mollie Williams, a PLF attorney, said in a statement.

“Because the First Amendment prohibits this kind of censorship, the law should be struck down.”

The City of Houston is 665 square miles, and the Theater District encompasses a small part of it, excluding “many of Houston’s dynamic cultural centers that lend themselves to busking,” according to the legal complaint.

The Theater District “is an absurdly small portion of Houston, and leaves out parts of town that might be considered ideal for buskers: Main Street and Montrose, as well as those rare other streets that invite casual pedestrian traffic, like 19th Street in the Heights,” Barilla writes.

Performers must obtain a permit whether they perform solo, or with others in a band or as a group, and regardless of how many people they intend to, or eventually do, attract. To obtain a permit, a performer must submit an application and pay a fee—$10 for 30 days and $50 for a year, the complaint states.

“Permits for street performers in other cities can be surprisingly affordable, reasonably regulated, and easy to research. A busker in Chicago’s subway will spend about $60 a year for the necessary documentation. Street performers without amplification can legally busk in much of New York City without any permit at all. And buskers in both places can figure this out in less than 30 seconds online.”

When granted, a permit in Houston covers only a single site within the district. When applying for a permit, artists also have to obtain written permission from owners of property abutting the site where they intend to play. That means that the artist is subject to a “heckler’s veto,” according to the legal complaint.

“This limitation, like all of the busking restrictions, does not apply to other speakers, like protestors or panhandlers.”