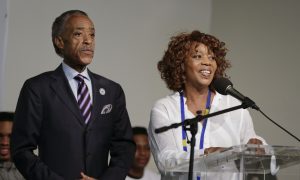 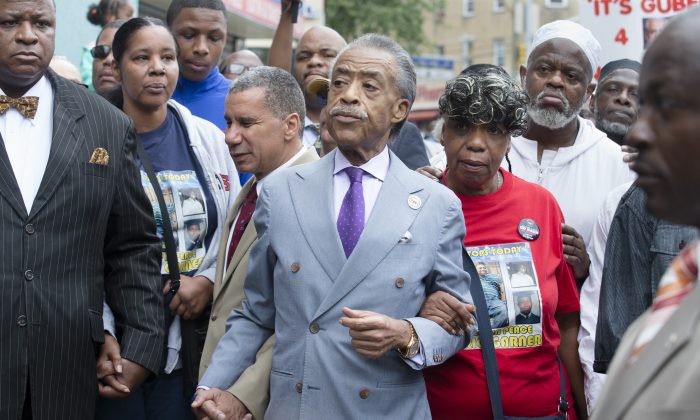 The Rev. Al Sharpton (C) holds hands with former New York Gov. David Paterson (L) and Gwen Carr (R), mother of Eric Garner, as they arrive before a march to protest the death of 43-year-old Eric Garner in the Staten Island borough of New York on Aug. 23, 2014. The Garner family has filed a notice of claim to sue New York City, the Police Department, and six individual police officers for $75 million. (AP Photo/John Minchillo)
News

NEW YORK—The family of a man who died after being placed in a police chokehold has filed a notice of claim to sue New York City, the Police Department, and six individual police officers for $75 million.

A spokesman for City Comptroller Scott Stringer said Tuesday that the claim is under review.

Representatives of the Police Department and the city Law Department did not immediately comment on the notice of claim.

Garner, who was unarmed, was stopped by police on Staten Island on July 17 on suspicion of selling loose cigarettes.

A video shot by an onlooker shows Garner telling the officers to leave him alone and refusing to be handcuffed.

Officer Daniel Pantaleo responded by apparently putting Garner in a chokehold, which is banned under police policy. Garner is heard gasping, “I can’t breathe.” He was later pronounced dead at the hospital.

The city medical examiner found that the chokehold contributed to Garner’s death. A grand jury will determine whether criminal charges are filed.

Garner’s death has sparked protests including an Aug. 23 march on Staten Island that drew thousands of people demanding justice.

The notice of claim was filed by the law firm of Sanford Rubenstein, who is being investigated by detectives after a woman accused him of rape.

The accuser said the attack happened when she went back to Rubenstein’s Manhattan apartment following a 60th birthday party last week for the Rev. Al Sharpton.

Sharpton, who has championed the Garner family’s pleas for justice, said Tuesday that the fact that Rubenstein’s name is on the notice of claim does not necessarily mean that Rubenstein will be the family’s attorney going forward.

Sharpton said in a statement that the notice of claim filing was planned to protect the family’s right to file a lawsuit before the deadline to file expires.

He said the family would make an announcement about its legal representation during Saturday’s weekly rally at Sharpton’s Harlem headquarters.