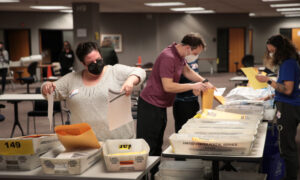 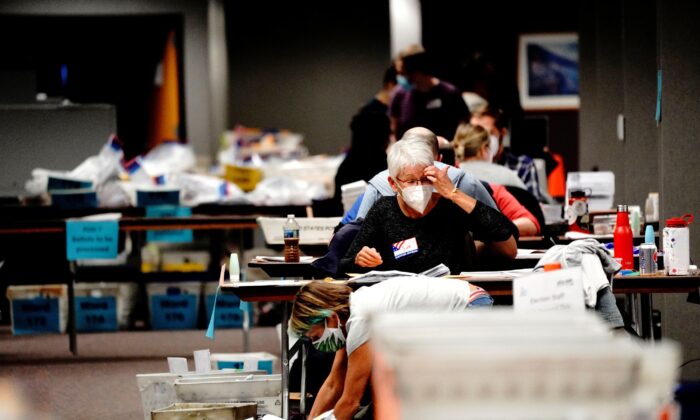 A poll worker gestures while processing absentee ballots at the Milwaukee Central Count the night of Election Day in Milwaukee, on Nov. 3, 2020. (Bing Guan/Reuters)
Wisconsin

A federal lawsuit in Wisconsin that drew nationwide attention was dismissed on Nov. 16.

Three voters filed the suit last week, seeking to exclude election results in three of the state’s counties. They alleged there was “sufficient evidence that illegal votes were counted” in Milwaukee, Dane, and Menominee counties “to change or place in doubt the results” of the presidential election.

But the voters on Nov. 16 requested the suit be dismissed.

Court filings didn’t give a reason why Michael Langenhorst, Michael LeMay, and Stephen Fifrick made the decision. Attorneys for the men said they couldn’t comment; two of them cited attorney-client privilege.

“Because of atty client privilege and because I do not telegraph my next moves, I cannot comment,” James Bopp Jr. told The Epoch Times via email.

“Unfortunately, attorney-client privilege does not allow us to discuss,” Jeffrey Gallant in an email.

Attorneys for those named in the lawsuit didn’t respond to a request by The Epoch Times for a response to the dismissal. The voters had sued county clerks and election commissioners, members of the Wisconsin Election Commission, and Gov. Tony Evers, a Democrat.

The Democratic Party of Wisconsin, the Wisconsin State Conference National Association for the Advancement of Colored People (NAACP), and the League of Women Voters of Wisconsin filed motions to intervene, challenging the basis of the suit.

NAACP attorneys said the suit constituted “an all-out attack on votes case by Black voters,” adding later that the plaintiffs used “untenable and untrue allegations that sufficient illegal ballots were included in the November 3, 2020, general election results to change or place those results in doubt.”

The Democratic Party of Wisconsin added: “Plaintiffs—who do not even live in the counties about which they complain—seek to disrupt the lawful certification of ballots in three of Wisconsin’s 72 counties based on nothing more than rank speculation and unsupported suspicion.”

Trump and his campaign have alleged election irregularities in a number of states, including Wisconsin.