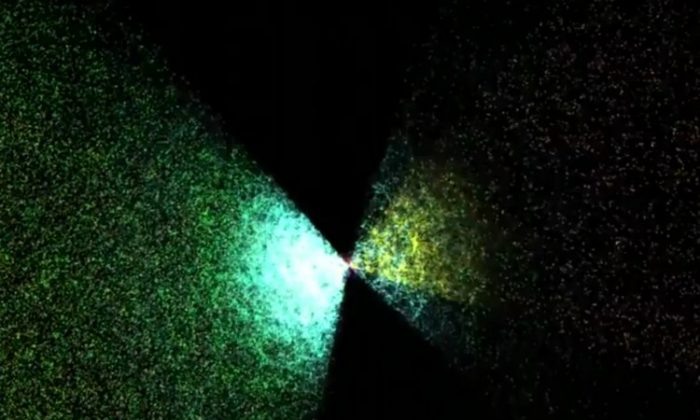 YouTube screenshot of the known universe from the Digital Universe Atlas at the American Museum of Natural History. (The Epoch Times)
Beyond Science

Laws of Physics Differ Across the Universe

Electromagnetism appears to vary with location, according to new research, which challenges one of science’s most fundamental principles that the laws of physics remain constant across the universe.

The study found that electromagnetism, one of the four known fundamental forces in nature, seems to differ across the universe. Electromagnetism is measured as the fine-structure constant and is represented by the symbol alpha.

Variation in alpha’s value was first observed a decade ago by John Webb and Victor Flambaum at Australia’s New South Wales University (UNSW) and colleagues, after analyzing observations of a large area in the sky from the Keck Observatory in Hawaii.

As part of a new international effort, the number of observations has now been doubled and the value of alpha measured in approximately 300 distant galaxies, using the European Southern Observatory’s Very Large Telescope in Chile.

“The results astonished us,” Webb said in a media release. “In one direction–from our location in the universe–alpha gets gradually weaker, yet in the opposite direction it gets gradually stronger.”

If confirmed, the discovery will have profound implications regarding our understanding of time-space as it violates one of the fundamental principles underlying Einstein’s General Relativity theory, Webb said.

“Such violations are actually expected in some more modern ‘Theories of Everything’ that try to unify all the known fundamental forces,” said Flambaum. “The smooth continuous change in alpha may also imply the universe is much larger than our observable part of it, possibly infinite.”

This research may have even wider significance.

“Another currently popular idea is that many universes exist, each having its own set of physical laws,” said Michael Murphy at Australia’s Swinburne University of Technology in the release.

“Even a slight change in the laws of nature means they weren’t ‘set in stone’ when our universe was born,” he continued. “The laws of nature you see may depend on your ‘space-time address’–when and where you happen to live in the universe.”

Webb said that the findings could also explain why the laws of nature appear to support the existence of life.

“The answer may be that other regions of the universe are not quite so favorable for life as we know it, and that the laws of physics we measure in our part of the universe are merely ‘local by-laws’, in which case it is no particular surprise to find life here,” he concluded.

The study was published in Physical Review Letters on Oct. 31.