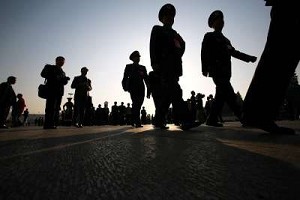 Laws are Changeable in the Hands of the Communist Party

On Dec. 31, Gao Zhisheng, one of the best attorneys in China, published a letter he had sent to the National People’s Congress and Wu Bangguo, chairman of the NPC Standing Committee, detailing the case of Falun Gong practitioner Huang Wei of Shijiazhuang, Hebei Province.

Gao pointed out that Chinese judicial officials knowingly break the law, depriving Falun Gong practitioners of their human rights. He called on the NPC to monitor and correct the injustices. Gao has received significant support from both inside and outside China at www.gmwq.com calling for the rights of Falun Gong practitioners to be protected. Epoch Times correspondent Qin Yue recently interviewed Dai Xuewu of Shanghai, one of those who offered support to Gao.

Dai was the public spokesman for the Democratic Party of China in Shanghai from 1999 to 2000. He was arrested in July 2000 for organizing commemoration activities for the 11th anniversary the June 4, 1989, Tiananmen Square massacre. He was imprisoned for three years in the Dafeng forced-labor camp, where he met many Falun Gong practitioners and witnessed the physical and mental torture of the practitioners at the hands of the police. Dai was released in 2003.

Epoch Times: I saw your support for attorney Gao Zhisheng on www.gmwq.com . Why do you support Mr. Gao?

Dai Xuewu: In 2000, without any reason, I was imprisoned in the Dafeng labor camp in Shanghai. I personally witnessed the brutal persecution of many Falun Gong friends. I think Mr. Gao’s actions, from what I understand of Falun Gong, are right. It is a concrete step in upholding human rights. So, as a citizen of China and an activist, I had a duty to sign.

ET: Could you describe the treatment of Falun Gong practitioners you witnessed?

ET: Why do you think Falun Gong practitioners are treated so unjustly in China?

Dai: These are the usual methods Chinese Communist Party rulers use to maintain their personal gains and power. Within China’s politics, they do not allow any opposition. Falun Gong isn’t against the party, but the practice promotes truthfulness, compassion and tolerance and spreads very quickly, so they feel a bit scared. They see it as a threat. Thus, they took their course of action, which is mandated by the evil nature of the party. As The Epoch Times’ “Jiuping,” or “Nine Commentaries on the Chinese Communist Party” states, “The CCP is just a cult organization.”

ET: Do you feel that the practitioners are what the government describes them to be?

Dai: No, no, no. The CCP is actually the cult that goes against humankind. On the contrary, Falun Gong promotes truthfulness and compassion and tolerance. It is a civil organization that can vigorously revive our Chinese traditional culture. Because the CCP’s nature is contrary to humanity, it will persecute anything truthful or compassionate.

ET: Is there any legal basis to sentence Falun Gong practitioners to labor camps?

Dai: Under the rule of the CCP, China’s laws are like poker cards in their hands that they can change at will. In my opinion, its so-called laws cannot be compared to the laws in the rest of the civilized world. The laws they make are laws that go against humanity.

ET: How do you view the labor camp system in China?

Dai: I have personally endured torture in a Chinese labor camp. I know this structure to be the darkest, most barbaric and most inhumane system. This system completely violates the United Nations’ human rights conventions. I am also one of the first to demand that the labor camps be abolished.

ET: What were your thoughts and feelings after reading the “Jiuping?”

Dai: I thought they were very well written. Through personal experiences, the commentaries can make readers understand and feel the many methods that the CCP uses against humanity, as well as methods to maintain their dead-end political power. What it revealed was also very deep. Since people like me, 40 or more years old, all experienced the Cultural Revolution, I am extremely familiar with the techniques of the CCP. That is why I feel that it was well written; it’s extremely great.

ET: What effects will the commentaries have in China?

Mr. Dai: There are huge effects. Recently, President Hu Jintao suggested learning from Cuba and North Korea; he said that he wants to drive the car of history in reverse. However, when the “Jiuping” came out, many within the party felt very insecure. If they were to try to return to a more repressive time, the general population would not accept it.

ET: What did you experience inside the labor camp?

Dai: Inside, I was imprisoned with Li Guotao, Guo Quanbao and some Falun Gong practitioners. They ordered us to make footballs. These balls were just like those from the Adidas company. The products were mainly for export. They demanded quotas; if we couldn’t meet them, they would punish and torture us. I opposed this, so they confined me.

ET: Recently, the Chinese government has started mass arrests of public figures. What do you think the reason is?

Dai: The reason has something to do with the “Jiuping.” The commentaries expose the nature of the party, and the CCP relies on deception to cheat the people. After the commentaries illuminate the CCP’s methods, would anyone want to be cheated and deceived? So the CCP members are very afraid. I just said what Hu Jintao’s words were; they want to learn from Cuba and North Korea to further control opinion. Of course, intellectuals are the first ones to oppose going backward.