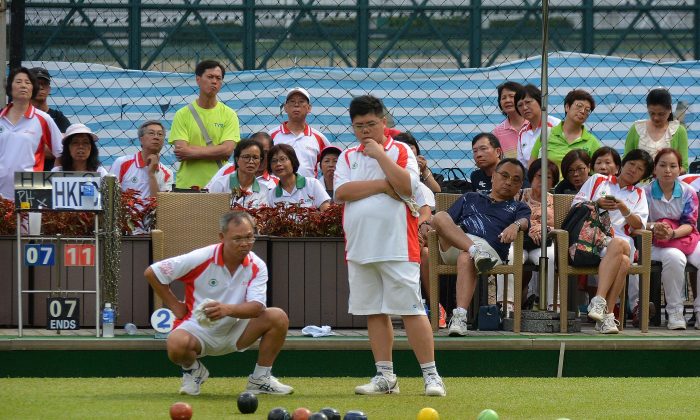 Hong Kong Football Club’s Anthony Yip (standing) on his way to defeating Esmond Lee from Phoenix in the final of the Reunification Cup on July 2. Stephanie Worth)
HK Lawn Bowls

HONG KONG—More than 600 bowlers braved the occasional downpours and intense sunlight over the weekend to participate in the Reunification Cup to celebrate the 20th anniversary of the establishment of the HKSAR.

The event attracted 144 teams from all clubs in Hong Kong and was the second largest local lawn bowls event ever organized, only surpassed by the Golden Jubilee Fours in 2012 when 168 teams participated.

The number of local teams were allocated based on the number of entries of each club in the Premier League. Also joining the event were teams from Macau and six cities from China, including Chaozhou, Dongguan, Guangzhou, Huizhou, Shenshen and Zhongshan.

It was played in fours format and there were no limits for the gender combination of each team. All teams were divided into roundrobin group of eight, with the top 32 on the overall results progressing to the knock-out stage of the cup, plate, bowl and spoon sections.

The games started under the beautiful but a bit intense sunshine on Saturday, July 1 and it progressed smoothly despite spontaneous downpours in the afternoon.

On early Sunday there was rain everywhere that caused the greens at a number of clubs to delay their start times.  With the cooperation of a number of clubs, the matches carried on with minor delay.

The finals were played at the outdoor greens of Hong Kong Football Club and their team duly lifted the Cup trophy. The plate went to the visiting city of Dongguan from southern China. Tuen Mun Sports Association and Custom & Excise Lawn Bowls Club took the Bowl and Spoon respectively.

Vincent Cheung, President of the Hong Kong Lawn Bowls Association said that the results do not really matter, “The last Reunification Cup was in 1998 when we celebrated the first anniversary of the establishment of the HKSAR. I am glad to see bowlers enjoying themselves in the event and with such atmosphere, winning is no longer the priority.”

He also expected more events of similar nature to come in the future.

The Reunification Cup was subvented by the Leisure & Cultural Services Department.

Finals Day will take place at Kowloon Cricket Club on Sunday July 9 starting at 10am and 2:30pm.