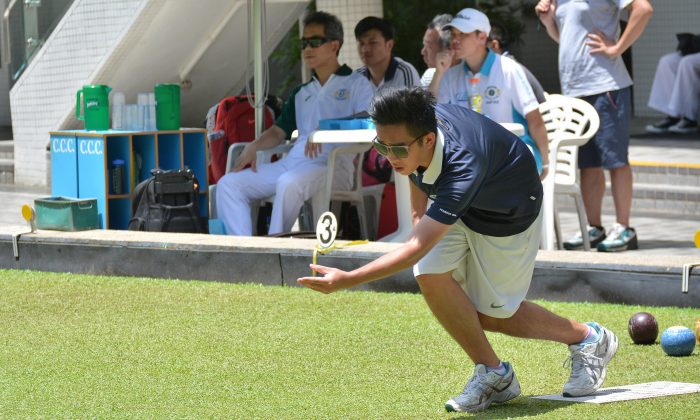 HONG KONG—A number of bowlers won their first ever National titles at the Finals Day on Sunday June 28 but the biggest winner is Hong Kong Youth Team product Jordi Lo, who scooped the National Pairs and Triples titles with his Craigengower Cricket Club teammates.

Lo, a 30 years old wine merchant who spent eight years with the Hong Kong Youth Team before reaching the age limit, joined CCC as an Elite Sports Member two years ago. His only success in National competition was a National Fours title back in 2008.

In the Pairs final, he partnered with the reigning Bowler of the Year and defending champion CY Wong to play against ex-Hong Kong international Milo Lai and ex-New Zealand squad member Dave Hanson from the Police team.

It was a tight game despite the CCC team always holding a thin margin and this was maintained into the last end when they were leading by a single shot. Lo drew a close shot and Wong pushed it behind the jack for better protection. Hanson tried to take it out with his last bowl but did not get the effect.

In the afternoon Lo continued his journey with other CCC clubmates, including Asia Pacific Championship gold medallist David Tso (both Triples titles in 1985 and 1991), 2013 U25 Singles champion Simpson Chang and 2011 Novice Singles winner Imen Tang. Their opponents from Tuen Mun Sports Association were looking forward to their first national title.

The TMSA team started the game well, opened a lead of seven shots after just three ends. The lead was maintained until the seventh end when Tso started to pick up his own rhythm and played many superb shots to turn each head. They won 11 shots from the next five ends to move ahead of their opponent.

From then on it was a one-sided game and Tso maintained his good form to pass the finishing line with a score of 22:14.

Lo believes that the move to CCC is key to his success and is vital for his bowling development, “I can train regularly with CCC’s facilities and they also offer opportunities for me to play league games at the top division. I also learned a lot from other members and that has helped me to improve my game rapidly.”

While Lo will certainly be in the Hong Kong squad next year, he is looking forward to demonstrating his ability in the world arena, “I don’t just want to put on the Hong Kong jersey, but aim to play well at international level.”

Tso was in jubilant mood after adding the 13th major title to his 40+ years of bowling career, his first since 1998, “I played very well today, just like my form in the good old days. Now I hope that my success will bring me back to the Hong Kong team and contribute to the success of lawn bowls for the territory.”

In other finals, the trio of Ken Chan, Noel Kennedy and Jerry Ng from Kowloon Cricket Club won their National Triples for the fourth time.

Hong Kong Football Club’s domination in the women section continued as they clinched the titles of the Pairs and Triples. Hong Kong National coach Rita Shek partnered with Wanis Sze to defeat clubmates Vivian Yip and Celena Kwok to win the National Pairs while May Poon and Flora Ni won their first national title in the Triples, under the skipping of Priscilla Lam.