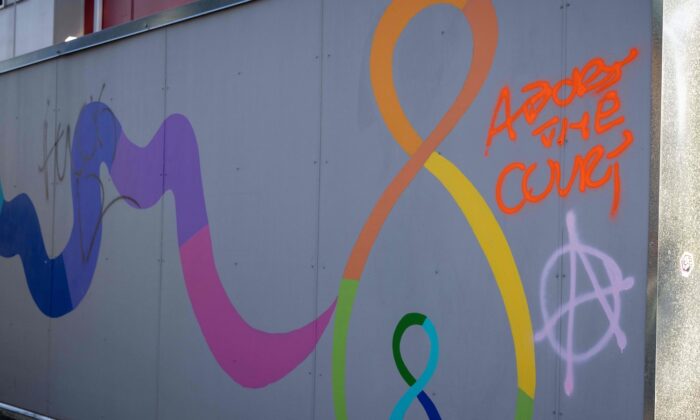 Spray-painted messages are seen at Mother and Child Education Center in Portland, Oregon, on June 26, 2022, after the property was vandalized by demonstrators the night of June 25, 2022. (John Rudoff/AFP via Getty Images)
Regional News

Two House lawmakers representing the state of Georgia have issued a letter to the head of the University of Georgia, urging him to take action after a map by two professors from the university was used by far-left groups to target pregnancy resource centers.

The centers, which generally provide women with pregnancy tests and counseling services geared toward preserving the life of the unborn child, have recently been vandalized and set on fire in the weeks leading up to and in the wake of the Supreme Court’s overturning of Roe v. Wade on June 24.

“We write to express our deep concern with the actions of two faculty members at the University of Georgia’s College of Public Health,” Reps. Andrew Clyde (R-Ga.) and Jody Hice (R-Ga.) said in the letter (pdf) to Jere Morehead, the university’s president.

Andrea Swartzendruber and Danielle Lambert, who are professors at the Epidemiology and Biostatistics Department at the University of Georgia, developed the “Crisis Pregnancy Center Map” that shows a searchable database of the street addresses of over 2,500 pregnancy resource centers.

Fox News recently reported that far-left extremists have been using the map to identify their next targets without explicitly calling for violence.

“The [Fox News] report further states that domestic terrorist groups are sharing and using the website to locate targets for criminal acts of violence and destruction,” the lawmakers wrote in their letter. “This is unacceptable.”

Clyde and Hice said that the website published by Swartzendruber and Lambert “is clearly nothing more than pro-abortion activism masquerading as academic research.”

“Abandoning any pretense of objectivity, their website refers to these crisis pregnancy centers as ‘fake women’s health centers,’ discrediting the essential resources and services offered by these centers to women in need.”

They noted that one page of the website says that the two professors and their team “can be contacted at cpcmap@uga.edu,” commenting: “It appears, at minimum, the University is providing resources for these faculty members to run this website.”

“Given the nationwide spate of attacks against crisis pregnancy centers and the hard evidence that this website is being used by radical organizations to identify targets for violence and property destruction, it is, at the very least, reckless and irresponsible for these professors and the University to maintain this map,” the House lawmakers wrote.

“Our constituents, including many University of Georgia students, work at and use the services provided by these crisis pregnancy centers.” they added. “Since the project apparently receives support from the University, we demand that you immediately take corrective action to ensure that university resources are no longer being used to target crisis pregnancy centers.”

The lawmakers requested a reply from Morehead by July 15.