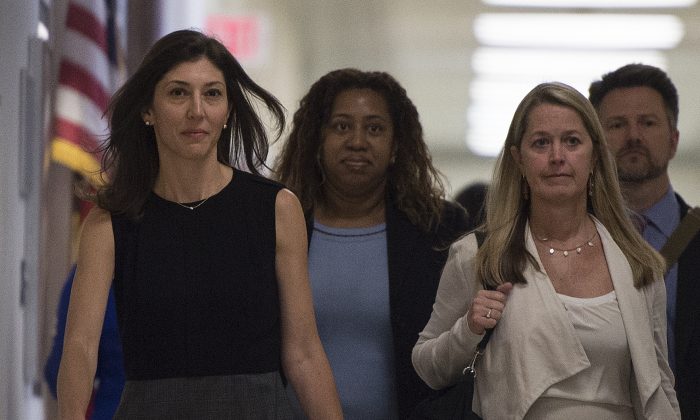 One of the major questions regarding the testimony was whether it would match the one given by FBI Deputy Assistant Director Peter Strzok.

But while Ratcliffe said he found a mismatch, Gohmert wouldn’t go so far.

Page and Strzok played major roles in the investigations on both 2016 presidential candidates: former Secretary of State Hillary Clinton’s use of a private email server and the Trump campaign’s alleged ties to Russia. During the same period, Page and Strzok had an affair and exchanged thousands of text messages expressing a strong bias against Trump and in favor of Clinton.

“When I questioned Lisa Page on Friday about the anti-Trump text messages that were sent between herself and Peter Strzok, there were significant differences in her testimony and Strzok’s as it relates to what she thought some of these text messages meant,” Ratcliffe said in a July 16 tweet, shortly before the second round of questioning.

Page gave us new information that Strzok either wouldn't or couldn't, confirming some of the concerns we had about these investigations and the people involved in running them.

Today we'll continue our deposition with Page to uncover more.

“Page gave us new information that Strzok either wouldn’t or couldn’t, confirming some of the concerns we had about these investigations and the people involved in running them,” he wrote.

“There are differences in their testimony,” he told Fox News. “In many cases, she admits that the text messages mean exactly what they say, as opposed to agent Strzok, who thinks that we’ve all misinterpreted his own words on any text message that might be negative.”

In one of the texts, Strzok vowed to “stop” Trump from becoming president. In another, the two discussed having an “insurance policy” in the “unlikely” event that Trump would win the election.

Strzok, who gave a closed-door testimony on June 27 and a public one on July 12, said the first message meant he and the American people would stop Trump. The second, he said previously, meant he wanted to pursue the Russia investigation aggressively, in case Trump won.

GOP lawmakers were furious with Strzok’s attitude and unwillingness to answer questions. In a scathing monologue, Gohmert even linked Strzok’s credibility to the fact that he was unfaithful to his wife.

He said Page didn’t contradict Strzok “so much,” but “has given us insights into who was involved in what.”

“I think she’ll be a good witness,” he said.

Page ditched her first testimony appointment on July 11, prompting GOP lawmakers to threaten her with contempt of Congress. She then agreed to appear on July 13, which gave her the opportunity to review Strzok’s public testimony before giving hers.

The lawmakers are probing the FBI’s and Justice Department’s decisions before the election, suspecting they were influenced by political considerations.

Texts between Strzok and Page suggest that the FBI initiated an offensive counterintelligence operation against the Trump campaign as early as December 2015.

At least three people contacted Trump campaign staffers and volunteers to offer compromising information on Clinton linked to Russia. Yet there’s no evidence any of the contacts were connected to Russian activity to interfere with the election or that anything of substance was actually provided to the campaign. As it gradually turned out, those three people were connected to high-level Western intelligence circles, the FBI, or, through intermediaries, the Democratic National Committee (DNC).

One was Joseph Mifsud, a Maltese academic closely affiliated with a spy school frequented by national security and intelligence officials of Western nations, including the United States, the United Kingdom, and Italy. Another was Henry Greenberg, a Russian criminal whose repeated entry into the United States was brokered by an FBI agent. And yet another was Natalia Veselnitskaya, a Russian lawyer, who was aided by the same company that was hired by the Clinton campaign and the DNC to produce the infamous Steele dossier.

The dossier was compiled by Christopher Steele, a former MI6 British intelligence agent, using second- and third-hand sources close to the Kremlin. The dossier’s claims about members of the Trump campaign, including that they colluded with Russia, were characterized by former FBI Director James Comey as “salacious and unverified.”

A group of congressmen has demanded a criminal investigation of several former high-level FBI and Justice Department officials over their use of the dossier to justify surveillance of Trump campaign volunteer adviser Carter Page, which, under the agencies’ “two-hop” rule, allowed spying on most, if not all, in the campaign.

The officials intentionally withheld from the FISA surveillance court that the warrant application to spy on Carter Page heavily relied on the dossier, according to a memo by the Republican majority of the House intelligence committee.

The Russia investigation was taken over last year by special counsel Robert Mueller, who fired Page and Strzok from his team after the news of their texts emerged. Mueller indicted 25 Russians and three companies for allegedly running a troll farm and hacking voters’ information and Democrats’ data. He also indicted several Trump campaign associates, but none of the charges substantiate the Trump–Russia allegations.