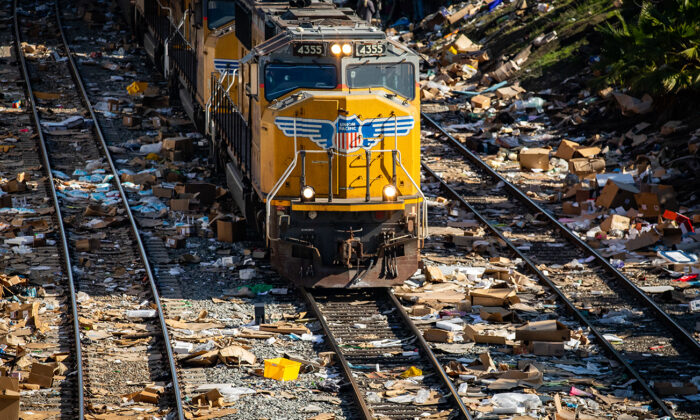 Los Angeles’s newest thefts, which went viral last week, have left Union Pacific train tracks in the area littered with opened boxes, scattered merchandise, and trash. Losses from the thefts have been so high that Union Pacific is considering diverting their railroad shipping routes away from the area.

The letter from the lawmakers, led by Rep. Michelle Steel of California’s 48th Congressional District, details that there has been a 160 percent increase in thefts along the tracks since December 2020, with concerns that they are being committed by “well-organized” crime rings.

Given the ongoing supply chain crisis occurring at the Los Angeles ports and the shortage of truck drivers in the state, the train thefts are making it even more difficult for businesses and customers to get the supplies they need.

As COVID-19 cases are on the rise, necessary medical items, including COVID-19 test kits and personal protective equipment, could become scarcer, according to the letter.

The representatives called on the attorney general to prosecute the thieves to prevent the situation from worsening, arguing the need for the Department of Justice and the Federal Bureau of Investigation to become involved because this “epidemic of robberies on all freight transportation” has been affecting not only California but also interstate and international commerce.

“We urge you to expeditiously prosecute and hold the perpetrators of these crimes accountable,” they wrote. “Bottlenecks at our local ports and the soft-on-crime approaches by the Los Angeles District Attorney have contributed to these types of thefts in our local communities. Your office must use every tool available to end this type of violence and organized crime.”