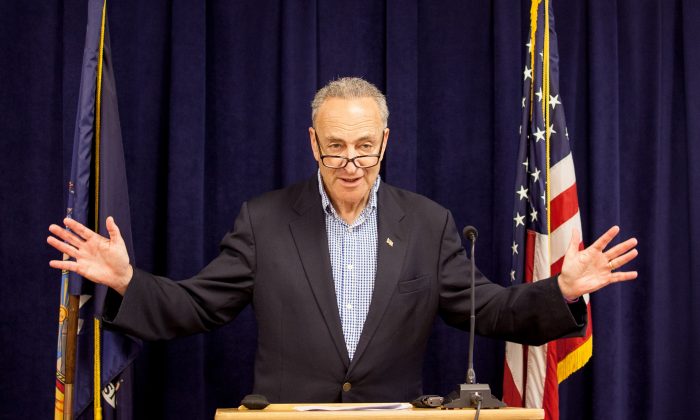 NEW YORK—As the Congress is studded with remains of bills slaughtered by the partisan skirmish, some senators were able to find common ground on an issue resonating with recent D-Day anniversary–healthcare for veterans.

New York Senator Charles Schumer announced support for a bill on Sunday that that would allow the government to hire more doctors, lease new spaces, and, in some cases, pay for private healthcare for veterans. Bernie Sanders, I-Vt., and chair of the Senate Veterans’ Affairs Committee, and John McCain, R-Ariz., announced the bill on June 5. The bill is expected on the senate floor this week.

The legislation was drafted in response to recent outcries over the long wait veterans have to endure to see a doctor. Sometimes, veterans were awaiting care for months, even dying while waiting, according to the Department of Veteran Affairs (VA).

The 350,000 veterans from New York, New Jersey, and Long Island enrolled in VA healthcare are not the worst off, Schumer noted. Still, the average waiting time is almost 19 days at three VA healthcare facilities in Manhattan, Brooklyn, and Jamaica, according to VA data obtained by USA Today.

Moreover, there may be a discrepancy between the numbers and reality. In early May, an internal VA report confirmed staff was falsifying data to report shorter waiting times in Phoenix, Arizona. On paper, the waiting time was 24 days. In reality, veterans were waiting almost four months. At least 18 people died while waiting, VA confirmed.

The findings caused an uproar and led to the resignation of VA secretary Eric Shinseki on May 30. Before leaving, Shinseki submitted a preliminary audit saying over 60 percent of VA healthcare facilities falsified records of waiting times at least once.

The final audit, showing results for all 150 VA facilities including the New York ones, is due this week.

The bill would cost almost $2 billion, but the impact on New York may be marginal. Of the 26 new facilities that would be leased, none are in the city. VA would get over $7 million to lease space in Brick clinic in New Jersey though. Vets would be redirected to private providers if a VA facility is farther than 40 miles, a non-issue for most New Yorkers, yet relevant for Long Islanders east of Brentwood.

The only significant help seems to be the proposed hiring of additional doctors and nurses, since lack of staff was cited as one of the major reasons for the long waits by the VA. VA Harbor Healthcare System, a provider with sites in Manhattan, Brooklyn, and Jamaica, lists 14 nurse openings, psychology internships, and other available positions on its website.

Schumer is hopeful the bill will get bipartisan support. “When Sanders and McCain can get together, so can the whole House and whole Senate,” he said during a Sunday press conference on the matter. “But let me tell you, in Washington, you never, never know.”