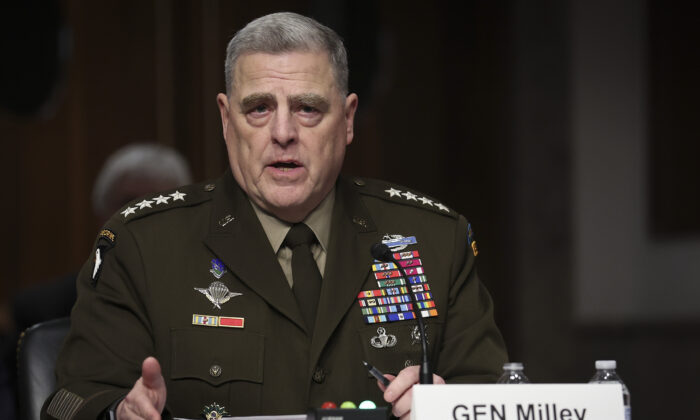 Congressional lawmakers have asked Joint Chiefs of Staff Chairman Gen. Mark Milley to respond to claims that he cut off the chain of command while serving under the Trump administration in early 2021.

The Republican lawmakers’ letter was issued in response to allegations in last year’s book, “Peril,” that he made phone calls to a top Chinese Communist Party counterpart twice in early 2021 to tell him that the United States had no plans to attack China. Republicans, including Sen. Chuck Grassley (R-Iowa) and Rep. Jim Banks (R-Ind.), have suggested that his calls usurped the statutory chain of command.

“Milley has yet to respond” to their “now months-old questions. Lawmakers have been seeking clarity on this serious potential breach of the American democratic order” since the publication of the book, said Grassley and Banks in a release on Thursday.

The book also alleged Milley told top-level military officers not to follow then-President Donald Trump’s orders unless he approved them beforehand. One of the calls to the CCP official allegedly occurred two days after the Jan. 6, 2021, Capitol breach, according to the book, which was authored by Bob Woodward and Robert Costa.

“If those books and all attended press coverage of those books, had contained gross misrepresentations. We would have heard about it a long time ago. He would have hammered the authors and corrected the record,” Grassley said in a speech on the floor of the Senate, according to a transcript. “However, to date, not a peep from the general. His silence speaks volumes.”

Grassley added that the general’s alleged actions “strike at the heart of our democracy—civilian control of the military.”

“He may have stepped out of his lane as the president’s principal military adviser and into the statutory chain of command, where law doesn’t allow him to go,” Grassley continued. “By law, the chairman of the Joint Chiefs of Staff has no command authority.”

In response to the claims last year, Milley told a congressional hearing that two calls were made to Chinese Gen. Li Zuocheng, a member of the CCP since the early 1970s, on Oct. 30, 2020, and Jan. 8, 2021. They were coordinated with former Defense Secretary Mark Esper’s and former acting Defense Secretary Chris Miller’s staff, he said.

“My task at that time was to de-escalate,” Milley told senators last September, saying that the objective of his calls with Li was “generated by concerning intelligence which caused us to believe the Chinese were worried about an attack by the U.S.”

“I believe that was faithfully executing the intent of the president of the United States at the time, because I knew with certainty that President Trump was not going to attack the Chinese just out of the blue,” Milley also said.

But Grassley said Thursday that Milley has yet to clarify whether some of the book’s other claims, including whether he usurped presidential power, are accurate.

The Epoch Times has contacted the Joint Chiefs of Staff’s office for comment.