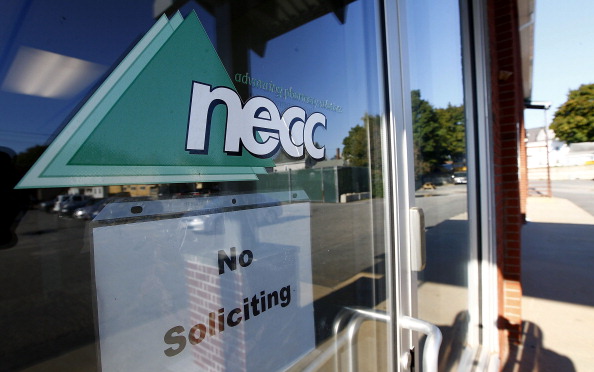 The New England Compounding Center is shown here on October 5, 2012 in Framingham, Massachusetts. (Photo by Jared Wickerham/Getty Images)
US

More cases are expected to arise in the outbreak of fungal meningitis traced to contaminated steroid shots. The now closed New England Compounding Center (NECC) expanded its voluntary recall to cover all products from its Framingham, Mass., facility, according to the Centers for Disease Control (CDC).

The incubating period for the illness is one to four weeks.

Some legislators and others are calling for new rules on compounding. While neighborhood and hospital pharmacies often compound drugs prescribed and tailored for individual patients, facilities such as the NECC come close to acting as drug manufacturers.

Drug compounders are not supervised as closely as drug manufacturers, and some groups are concerned that the lack of oversight is a dangerous loophole.

Democratic legislators are calling for new regulations. So far, Republican lawmakers have not taken action.

Sen. Richard Blumenthal (D-Conn.) wrote a letter to Commissioner Margaret Hamburg, head of the Food and Drug Administration (FDA), in which he said, “The recent outbreak of dangerous, potentially deadly disease indicates a clear and present need for stronger accountability and oversight. Stricter scrutiny by the FDA could help prevent contamination of medicines—apparently the cause of this 23 state crisis—produced by such compounding pharmacies.

“Their relative immunity from standards of safety and effectiveness seems anomalous and unacceptable.” Blumenthal serves on the Senate Committee on Health, Education, Labor, and Pensions.

Congressman Edward J. Markey (D-Mass.), senior member of the Energy and Commerce Committee, wrote, “Compounding pharmacies currently fall into a regulatory black hole,” in his own Oct. 8 letter to Hamburg.

As of Oct. 9, 105 people have fallen ill across 9 states, and 8 of them have died. The patients received epidural steroid shots for back pain, starting on May 21, the CDC reported. All three lots given to the infected patients have been recalled.

The FDA identified fungal contamination in samples of preservative-free prednisone made by the NECC. Multiple agencies are investigating how the problem occurred.

Fungal meningitis is not contagious. People who have had steroid injections within one month should seek medical help if they have symptoms of sensitivity to light, severe headache, weakness, fever, or redness or swelling at the injection site, the CDC stated.

About 13,000 people have received the injections, according to the CDC.

The outbreak was first reported from Tennessee on Sept. 21, when the Tennessee Department of Health told the CDC about a patient who developed meningitis approximately 19 days following an epidural steroid injection at a Tennessee ambulatory surgery center. By Sept. 28, cases had been reported outside Tennessee.

Tennessee has the highest number of cases, 35, according to Reuters. Saint Thomas Hospital in Nashville received about 2,000 vials from the compounder, and its emergency room has been busy with people checking their symptoms.

Dr. Robert Latham, chief of medicine at Saint Thomas, said, “We’ve seen upwards of 40 to 50 patients a day since last Monday through the emergency room that have had to be extensively evaluated,” Reuters reported. In Tennessee, there have been four deaths from the illness.