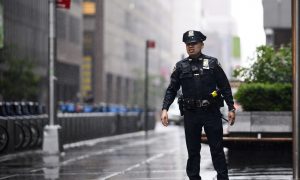 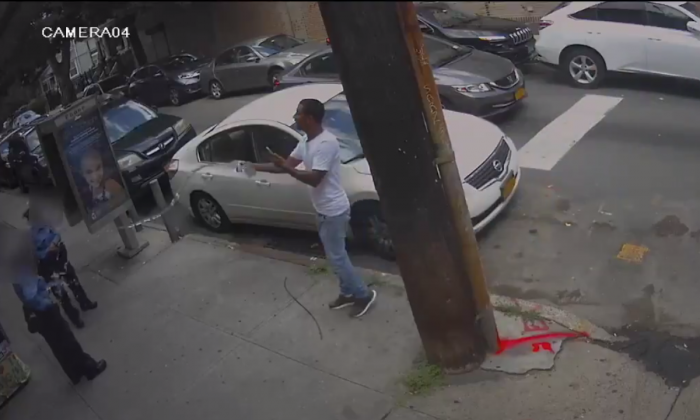 Two traffic officers were standing near Jamaica Avenue and 86th Street on July 24 afternoon when a man walked over and sprayed water on them. (Screenshot/NYPD Crime Stoppers)
US News

New York lawmakers are pushing a bill that would make throwing water on police officers a felony after a rash of such attacks took place in New York City in July.

“New York State must send a message that this will not be tolerated and I am confident that this bill provides law enforcement the tools they need to properly react,” said LiPetri at a press conference on July 31, reported WABC.

The legislation would make it a Class E felony to throw or spray water or another substance against a police officer or peace officer. Violators would face up to four years in prison.

The videos of cops being doused with water and having objects hurled at them as they made an arrest in #Harlem is reprehensible. NYC’s cops & communities have made remarkable progress — together — but EVERY New Yorker MUST show respect for our cops. They deserve nothing less. pic.twitter.com/mPtPPbUSGZ

For the bill to pass, it would need to be approved by the Assembly and state Senate before being signed by Gov. Andrew Cuomo, a Democrat. Cuomo has not indicated his position on the bill.

“Hopefully my colleagues in Albany will support this legislation from both sides of the aisle. Because if that’s what they care about, the safety of our law enforcement, they will,” Reilly said.

De Blasio has issued statements condemning the attacks, writing in one: “When you disrespect our NYPD officers, you disrespect ALL New Yorkers. We don’t tolerate that in our city.”

LiPetri said that the mayor should display support for the police and that he should use his national platform to “burn rather than build bridges” between the community and law enforcement, reported NBC NY.

He called on de Blasio to condemn the attacks at Wednesday’s debate in Detroit but the mayor did not do so.

“We now have individuals literally drenching on-duty police officers with buckets of water during routine patrol. Patrol aimed solely at protecting the quality of life in the neighborhoods they serve. This time it’s water. But what’s next? Gasoline? Acid?” LiPetri said. “We must send a strong message that such acts will not be tolerated.”

LiPetri expounded during an appearance on Fox News, saying: “If New York state says it stands for law enforcement, it will pass our legislature. But that’s where it’s going to be decided, where now actions speak louder than words. A lot of politicians, they like to talk, well now, now they get to see them put it to the test.”

A man has been arrested for allegedly dousing NYPD officers with water https://t.co/foUQjKworU pic.twitter.com/Awe22PX1bi

“The difference is, unlike other states and cities, New York state likes to push forward this anti-cop rhetoric and tells our law enforcement not to arrest them and our DAs frankly right now aren’t prosecuting as they should. They have to prosecute these criminals to the fullest extent,” he added.

Robert Perez, 24, was arrested in late July for allegedly drenching two female police officers with water in the Bronx, reported Pix 11. He was charged with criminal mischief, harassment, disorderly conduct, and criminal tampering.

Three suspects were arrested on July 24 for allegedly being involved in other dousings. One was identified as known gang member Courtney “Killer Court” Thompson.

They faced charges including of obstruction of governmental administration, criminal nuisance, criminal tampering.