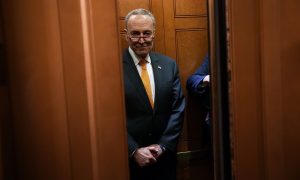 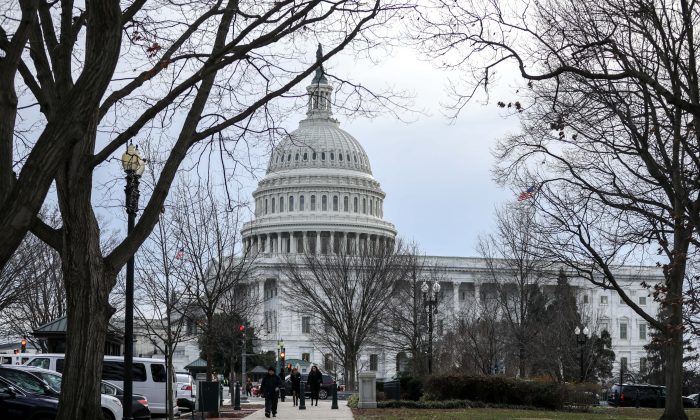 A group of House lawmakers has introduced a bill that would withhold pay from members of Congress, the president, and vice president during a government shutdown.

Congressman Jared Golden (D-Maine) was joined by Rep. Dan Crenshaw (R-Texas) and Rep. Max Rose (D-N.Y.) in introducing the Solidarity in Salary Act of 2019 (pdf) on Jan. 29. The intention of the bill is to prevent and limit the duration of future shutdowns and ensure that lawmakers feel the harm they cause federal employees when they fail to fund the government, according to a statement.

Federal workers don’t get paid during a gov’t shutdown. Neither should Congress. It’s just common sense.

I’m introducing the bipartisan Solidarity in Salary Act today with @RepDanCrenshaw and @RepMaxRose to withhold pay from Congress, @POTUS, & @vp during a shutdown. pic.twitter.com/Cjb5xcIAPy

About 800,000 federal employees did not receive their pay during the most recent partial government shutdown—nearly 380,000 federal employees were furloughed and 420,000 worked without pay during the shutdown. Many federal government agencies halted some of their activities or faced a jump in employees calling in sick, which prompted concerns in several areas like travel and food safety.

The partial government shutdown ended after President Donald Trump signed a short-term spending bill on Jan. 25, to temporarily reopen the government. This ended the longest furlough in history that began Dec. 22, as a result of a standoff between the White House and Democratic leaders over funding for a border wall.

Trump praised the federal employees and their families as “incredible patriots” and “amazing.” The White House promised federal workers that they would be paid as soon as possible.

“Federal workers don’t get paid during a government shutdown. Neither should politicians. That’s just common sense,” Golden said in a statement.

“Federal employees should never have to carry the burden caused by a dysfunctional government; that’s why I’m proud to cosponsor this legislation,” Crenshaw said. During the partial government shutdown, Crenshaw asked the Chief Administrative Officer to withhold his pay until the government reopened. Many social media users praised him for this move.

I cannot in good conscience get paid while federal employees’ financial futures hang in the balance because of this partial government shutdown. I’ve asked the Chief Administrative Officer to withhold my pay until we have come to an agreement to adequately fund border security. pic.twitter.com/2g37vAAtx2

“I cannot in good conscience get paid while federal employees’ financial futures hang in the balance because of this partial government shutdown,” the former Navy SEAL wrote in a tweet on Jan. 10.

The federal government partially shut down on Dec. 22, after Congress failed to come to an agreement about funding.

Democratic leaders in Congress refused to negotiate to fund for a border wall while the government was closed, calling it expensive and ineffective. Trump’s move to reopen the government is a temporary concession that returns the spotlight to House speaker Nancy Pelosi (D-Calif.) and Senate Minority Leader Chuck Schumer (D-N.Y.).

The federal government has three weeks until Feb. 15, for them to negotiate long-term funding for border security.