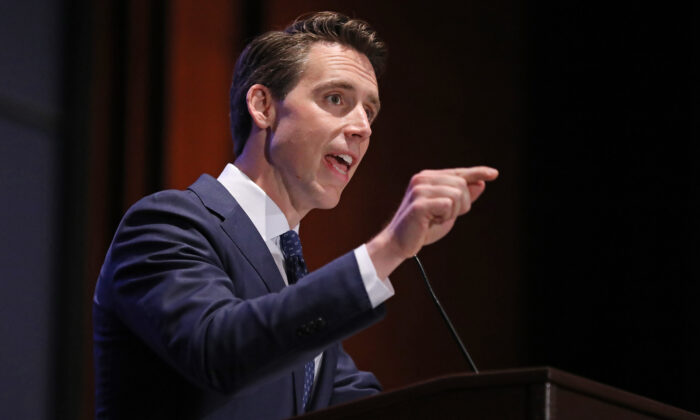 Lawmakers introduced a new bill to the House and Senate on Oct. 29 to prevent Chinese spies from stealing sensitive U.S. technology at academic institutions.

It would also require security officials to develop mandatory counterintelligence awareness training for academic faculty at colleges and universities, so they can detect potential espionage. The bill also includes measures to identify sensitive areas of study or degree programs, and track anytime an international student changes his or her area of concentration—a red flag indicating suspicious activity.

Sen. Josh Hawley (R-Mo.), who brought forth the bill at the Senate, said in a press release that the legislation would empower the DHS to “address this growing threat by increasing counterintelligence vetting for student and academic visas.”

He said intelligence officials have been sounding the alarm on state-backed Chinese student spies who steal U.S. technologies critical to national security.

“For too long, the United States has turned a blind eye to growing exploitation by nations like China to use our academic institutions as a method to steal sensitive and valuable information and technologies,” said Rep. Mark Walker (R-N.C.), who introduced the House version of the bill.

“We have a duty to protect American intellectual property.”

More than 80 percent of all economic espionage charges in federal cases since 2012 trace back to China, according to the U.S. Department of Justice (DOJ). The department launched the China Initiative in 2018 to combat Chinese espionage threats.

When asked about the risk posed by Chinese students in advanced education programs during a 2018 Senate Intelligence Committee hearing, FBI Director Christopher Wray said that the “use of [Chinese] nontraditional collectors … is across basically every discipline,” and in large and small cities.

“I think the level of naiveté on the part of the academic sector about this creates its own issues,” Wray said, adding that the “whole-of-society threat” from China would also “take a whole-of-society response” from the United States.

The DOJ has prosecuted several cases of students from China who were caught stealing trade secrets or intelligence on behalf of the Chinese regime.

For example, in September 2018, federal authorities arrested Chinese student Ji Chaoqun, who had acted as a Chinese agent for China’s top intelligence organization, the Ministry of State Security.

The prosecutors said that Ji, who came on an F1 visa studying electrical engineering at Chicago’s Illinois Institute of Technology, tried to recruit engineers and scientists for the Chinese government. A search warrant issued in 2015 revealed that Ji collected information about at least eight naturalized U.S. citizens from Taiwan or China, which he passed along to a senior Chinese intelligence official.

Liu Ruopeng, who pursued a doctorate degree at Duke University in 2006, worked at a lab that developed a prototype of an “invisibility cloak” that could conceal objects from microwaves.

He later established a research institute in China and a Hong Kong-listed company with the technology. The FBI raised a red flag on the case but ultimately didn’t charge him due to lack of evidence.

There are around 360,000 Chinese students currently studying in the United States, according to the latest estimates by the Institute of International Education. Although academic espionage applies to a small percentage of Chinese students, experts said that the damage caused could be disconcerting.

“The problem is that the technologies that they take are so devastating, and provide such an economic boost or a military boost to China, that its [impact] is … disproportionate,” Nicholas Eftimiades told The Epoch Times in a recent interview.

In July, Hawley also wrote to the University of Missouri and Webster University asking them to reconsider their partnership with China’s state-sponsored Confucius Institutes, which he called “a tool for China to spread influence and exercise soft power in its rivalry with the United States.”