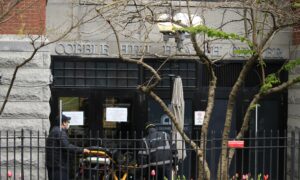 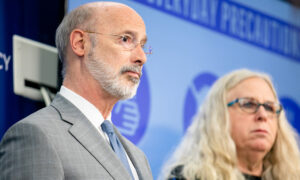 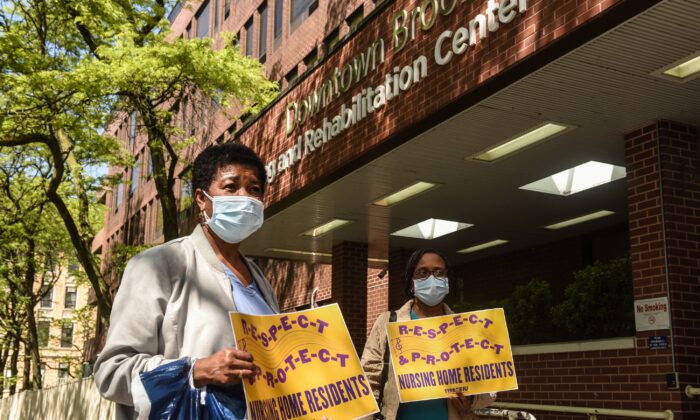 Nursing home workers hold a vigil outside of the Downtown Brooklyn Nursing and Rehabilitation Center in New York on May 21, 2020. (Stephanie Keith/Getty Images)
US News

Republican lawmakers on the House Select Subcommittee on the Coronavirus Crisis sent letters on June 15 to the governors of five states that mandated that nursing homes take in COVID-19 patients despite federal pandemic guidance to the contrary.

The letters, signed by five Republicans on the CCP virus committee, were sent to the governors of New York, Michigan, California, New Jersey, and Pennsylvania. The letter demands records on the number of COVID-19 cases and deaths at nursing homes, executive pandemic orders and directives on nursing homes, and other relevant documents and communications.

“The ongoing COVID-19 pandemic has disproportionately affected the elderly, especially those living in nursing homes and other long-term care facilities,” the letters state. “We write seeking information, at a granular level, about the science and information used to inform your decision to mandate nursing homes and long-term care facilities admit untested and contagious COVID-19 patients from hospitals.”

Michigan Gov. Gretchen Whitmer issued a similar order on April 15. The state health departments in California, New Jersey, and Pennsylvania issued similar guidance and directives in mid-to-late March. All five of the governors are Democrats.

Rich Azzopardi, senior adviser to Cuomo, said in a statement emailed to The Epoch Times, “These craven political hacks sent this same partisan document to several other states—all of which happen to have Democratic governors—apparently seeking some sort of election-year boost and to misdirect attention away from the oversight committee’s investigation into the federal pandemic response.”

Azzopardi pointed out that current New York state law prohibits nursing homes from accepting patients for whom they can’t provide adequate care. The state’s law is similar to the federal guidelines issued (pdf) on March 13, which advised that nursing homes only take in patients with actual and suspected CCP virus infections if they were capable of following the quarantine guidelines from the Centers for Disease Control and Prevention (CDC). The same federal guidance called on nursing homes to restrict all nonessential visits, among other measures, to protect elderly Americans, who faced the greatest risk of a fatal outcome in case of an infection.

The offices of the governors of the four other states didn’t respond to requests for comment by press time.

Some 6,360 nursing home residents in New York died from the CCP virus, more than a quarter of the state’s total pandemic death toll, according to the letter (pdf) sent to Cuomo. More than 15,500 nursing home patients died from the virus in California, New Jersey, Pennsylvania, and Michigan.

“Just about the worst possible thing to do is knowingly introduce coronavirus to the most vulnerable populations, yet that’s exactly what several states did by mandating nursing homes accept infected patients,” Select Subcommittee member Jackie Walorski (R-Ind.) said. “These misguided policies deserve close scrutiny, and the leaders who put them in place have a lot of tough questions to answer.”

Michigan and Pennsylvania lost 3 percent of their nursing home populations to the virus. California, which quickly changed course after adopting guidelines similar to New York, lost 1 percent of all nursing home residents, according to the letters from the committee.