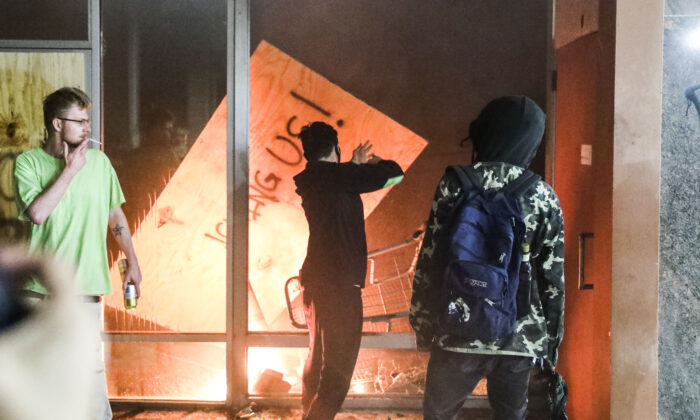 Rioters set fire to a Wells fargo bank across the street from the Minneapolis Police 5th Precinct during the fourth night of protests and violence following the death of George Floyd, in Minneapolis, Minn., on May 29, 2020. (Charlotte Cuthbertson/The Epoch Times)
US News

After a weekend of violence, lawmakers took to their social media accounts and public venues to condemn the rioting. Since the killing of George Floyd, protests have erupted all over the United States, with many turning violent with people looting and burning business.

“If you are a non-violent protestor, selflessly saying ‘enough is enough’…we admire and respect your vigilance. It’s what we need. For those that believe violence is a way to take advantage of this situation…we can’t tolerate that,” said Sen. Tim Scott (R-S.C.) in a tweet.

According to reports, at least 4,400 people have been arrested nationwide amid riots that are interspersed among peaceful protests, expressing grief and anger over the killing of George Floyd, a black man who died after a Minneapolis police officer knelt on his neck for nearly nine minutes during an arrest last week.

“According to authorities in #Minnesota (e)very single person arrested during last night violence and looting was from out of state. Adds to the growing indications that much of the violence  and looting we are seeing is to further a very different agenda,” wrote Sen. Marco Rubio (R-Fla.) on Twitter.

“These are Anarchists taking over the streets in cities throughout America. Bring in a lot more National Guard. Bring in more police and shut down these riots going on tonight. Time to restore order. ENOUGH!,” said Rep. Lee Zeldin (R-N.Y.)

At the nation’s Capitol Sunday night, violence broke out and fires were set in a few different locations including a historic church and national monument St. Johns Church across from the White House. The WWII memorial was also vandalized.

“It does not advance freedom or justice to vandalize the World War II Memorial that stands for those who bled and died for exactly those values,” Sen. Mitch McConnell (R-Ky.) said Monday.

“George Floyd’s death is deeply disturbing, & I welcome quick action to get justice for him in accordance with law. And we should always respect the rights of peaceful protesters. But anarchy, looting, and rioting–we have zero tolerance for that, and it needs to end tonight,” said Sen. Tom Cotton (R-Ark.).

“What are y’all doing? Y’all doing nothing. Because that’s not going to bring my brother back at all… Do this peacefully. Please,” he said.

A Minneapolis police officer has been charged with third-degree murder in Floyd’s death, and three other officers were fired. Bystander video showed the officer, Derek Chauvin, holding his knee on Floyd’s neck despite the man’s cries that he can’t breathe until he eventually stopped moving.

According to a statement from the family lawyer, the results of the second independent autopsy, commissioned by his family, say that “sustained pressure on the right side of Floyd’s carotid artery impeded blood flow to the brain, and weight on his back impeded his ability to breathe.”

President Donald Trump, in a speech Saturday at Florida’s Cape Canaveral, said he spoke to Floyd’s family to express sorrow for his death. He added that the officers involved in the incident have been fired, one of them has been charged with murder, and that charges could be brought against the other three.

“Healing, not hatred, justice, not chaos is the mission at hand,” Trump said.

Sen. Ted Cruz (R-Texas) quoted Attorney General Bill Barr saying there would be legal ramification for violence carried out by rioters, who have hijacked many peaceful protests.