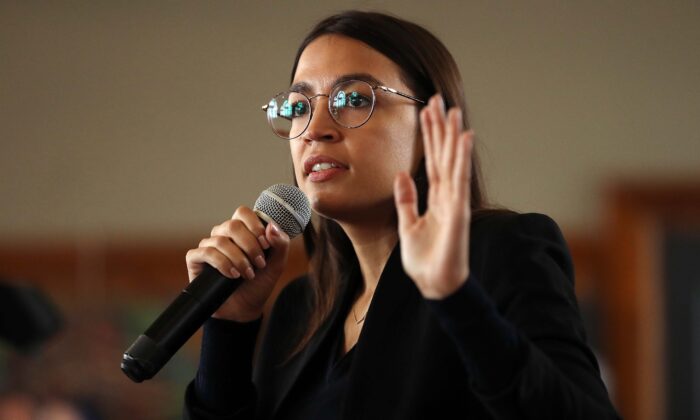 Lawmaker With Office Near Rep. Ocasio-Cortez Questions Validity of Her Story

She wrote: “Wild that @NancyMace is discrediting herself less than 1 mo in office w/ such dishonest attacks. She *went on record* saying she barricaded in fear. @NancyMace who else’s experiences will you minimize?Capitol Police in Longworth? Custodial workers who cleaned up shards of glass?”

Rep. Nancy Mace (R-S.C.), who said she has an office near Rep. Alexandria Ocasio-Cortez (D-N.Y.), questioned the validity of Ocasio-Cortez’s account of the Jan. 6 Capitol riots and said that the group that breached the Capitol building never went down their hallway.

“AOC made clear she didn’t know who was at her door. Breathless attempts by media to fan fictitious news flames are dangerous,” Mace wrote on Twitter. “My office is 2 doors down. Insurrectionists never stormed our hallway. Egregious doesn’t even begin to cover it. Is there nothing MSM won’t politicize?”

Mace also posted screenshots of Ocasio-Cortez’s story, including one from Newsweek that said the New York Democrat was forced to take cover in the bathroom.

.@AOC made clear she didn’t know who was at her door. Breathless attempts by media to fan fictitious news flames are dangerous.

My office is 2 doors down. Insurrectionists never stormed our hallway. Egregious doesn’t even begin to cover it. Is there nothing MSM won’t politicize? pic.twitter.com/Tl1GiPSOft

“So I run back into my office,” Ocasio-Cortez said during an Instagram live-stream on Monday. “I slam my door. There’s another kind of like back area to my office, and I open it, and there’s a closet and a bathroom. And I jump into my bathroom.” She said her legislative director, Geraldo Bonilla-Chavez, told her to “hide, hide, run and hide.”

Other reports questioned whether Ocasio-Cortez was inside the Capitol building during the riot. Those reports said she was in the nearby Cannon Building in the Capitol complex.

But Ocasio-Cortez pushed back against the claims.

“They are manipulating the fact that most people don’t know the layout [of] the Capitol complex,” Ocasio-Cortez said on Twitter in response to a tweet by conservative pundit Jack Posobiec. “We were all on the Capitol complex—the attack wasn’t just on the dome.”

The Epoch Times has reached out to Ocasio-Cortez’s office for comment about Mace’s remarks.