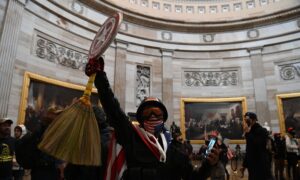 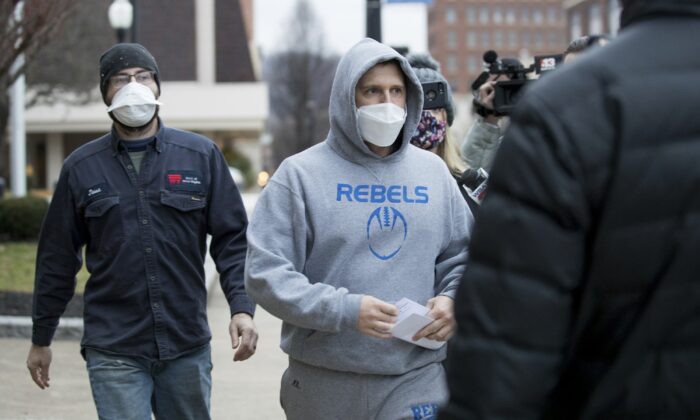 A lawmaker from West Virginia who filmed himself while protesters entered the U.S. Capitol building in Washington earlier this week has been federally charged for entering a restricted area of the building.

Derrick Evans, 35, a Republican and member of the West Virginia House of Delegates, was among other people from the state who traveled to Washington to attend the multi-day rallies that were organized near the White House against the Electoral College results and alleged election fraud.

Evans appeared before a federal judge on Friday in Huntington, a city in the Cabell and Wayne Counties, after he was taken into custody on two misdemeanors—entering a restricted area and disorderly conduct.

He faces up to 18 months in federal prison if convicted of these charges.

Ken Kohl, a top deputy federal prosecutor in Washington, announced the case against Evans on a call in which he presented dozens of new charges against members of the crowd that breached the Capitol on Wednesday.

John H. Bryan, an attorney representing Evans, said in a statement (pdf) on Jan. 8 his client “did nothing wrong” and did not engage in any violence, or destruction of property.

“Mr. Evans did nothing wrong,” the civil rights attorney said. “He was exercising his First Amendment rights to peacefully protest and ﬁlm a historic and dynamic event. He engaged in no violence, no rioting, no destruction of property, and no illegal behavior.”

Bryan added that his client did not organize or lead a group to travel to the protest. The statement reads Evans personally bought himself a ticket for a charter bus ride to attend the “Stop the Steal” rally which was already planned long before the Jan. 6 incident.

Evans was seen in a now-deleted cell phone recording that was widely shared online wearing a helmet as he joined a group of protesters pushing their way into the Capitol building, livestreaming himself strolling inside.

“We’re in! We’re in! Derrick Evans is in the Capitol!” the lawmaker can be heard saying. “Our house!” he yelled once inside the Capitol halls. “I don’t know where we’re going. I’m following the crowd.”

The video footage shows Evans getting pushed into the Capitol and milling around the building’s Rotunda, where historic paintings depict the republic’s founding. Evans reportedly implored others to not vandalize artwork and busts.

FBI agent David DiMarco wrote in a criminal complaint that Evans allegedly joined and encouraged the crowd to unlawfully enter the Capitol after days of telling his followers on Facebook to fight for President Donald Trump during the Jan. 6 demonstrations.

Evans, who is also an independent activist and journalist with more than 30,000 followers on Facebook, has not publicly posted on social media since issuing the statement, which says he attended the events as an “independent member of the media to film history.”

Bryans said his client attended the protest in consistence with his “long history of exercising his constitutional rights in this manner,” adding that Evans has “previously traveled throughout the country for similar in furtherance of his activism and amateur journalism.”

“At no point was Mr. Evans located in the crowd on the West side of the (Capitol) building, nor anywhere else on the Capitol grounds, where violence and destruction of property was, or had been, occurring,” the attorney wrote in the statement. “Given the sheer size of the group walking in, Mr. Evans had no choice but to enter.”

A growing number of Republicans and Democrats said they want to expel Evans from the legislature if he doesn’t resign himself. Over 66,000 people have signed a petition on change.org asking for Evans’ removal.