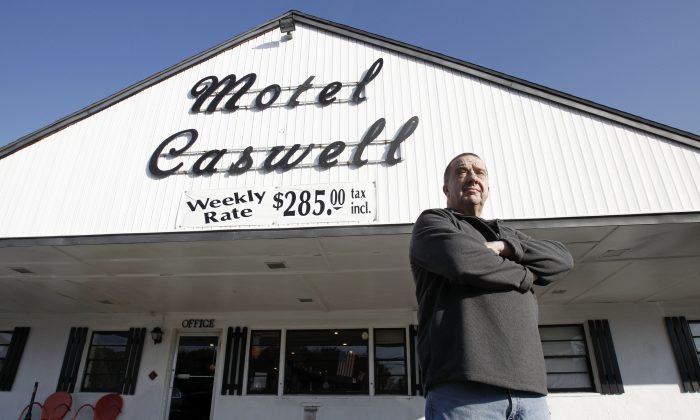 Owner Russ Caswell outside his Motel Caswell in Tewksbury, Mass. on Nov. 9, 2011. Caswell fought to keep the federal government from taking his motel because the government claimed there was drug-dealing among the motel's guests. A Federal judge dismissed the case in January of 2013. (Winslow Townson/AP Photo)
US

LOS ANGLES—Legislators are trying to make it harder for law enforcement officials to seize money and property from people who have not been charged with a crime.

This is because under current federal laws, law enforcement can seize property if an officer believes they have a “preponderance of the evidence,” or more than 50 percent of the evidence points to a crime being committed.

In addition, the burden of proof is on the property owner to prove in a federal court that their things were wrongly taken. The process can cost more than the value of the property that was confiscated.

Lewis said people often call him after their money is taken at the airport by security. In one case, a man flew to Los Angeles from out of state to buy a car with $10,000 in cash. Law enforcement officials were suspicious of so much cash, and a drug-sniffing dog signaled traces of narcotics on the money.

The officials took the cash, but the man was not convicted of any crime. He was left with the option of spending what Lewis estimated could be $20,000 on a lawsuit, or not fighting it at all.

A report by the Institute of Justice called “Bad Apples or Bad Laws: Testing the Incentive of Civil Forfeiture” released this month concluded “allowing law enforcement to take property and keep the proceeds creates incentives for abuse.”

California Rep. Tony Cárdenas (D-Calif.) and New Jersey Rep.Scott Garrett (D-N.J.) introduced the FAIR Act in the House earlier this month to restore the right to due process given to citizens by the Fifth Amendment.

“Satisfying a profit motive must never be the reason for law enforcement,” said Cárdenas in a statement. “And it certainly must never be allowed to support the seizure of personal property by those who we trust to protect and defend our nation and our Constitution.”

The new legislation would raise the proof to “clear and convincing evidence,” which is a higher standard and put the burden of proof on law enforcement to show it was taken legally.

Retired LAPD Leiutenant Raymond E. Foster said in an email, “I have seen where the use of the [forfeiture] law has disrupted drug organizations. On the other hand, I think that the government ought to meet a high standard of proof when taking our property.”

Many states, including California, already have a higher standard, although local police have found ways around it.

Attorney Pio S. Kim, who is a former federal prosecutor, gives another side to the argument. He told Epoch Times over the phone that asset forfeiture is a very important tool for law enforcement and abuse is rare; the money is often used to compensate victims of crimes.

The proposed legislation would put the proceeds of any seizure into the general fund of the U.S .Treasury, instead of letting law enforcement departments divide it amongst themselves.

Both bills have been referred to committees.