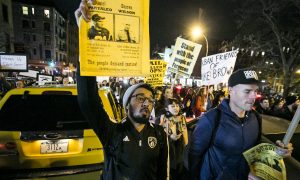 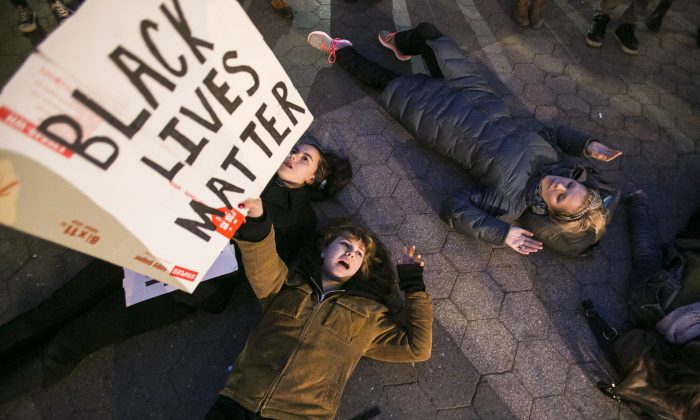 Protesters in Union Square on Dec. 4, 2014, a day after the Staten Island grand jury decision not to indict a white police officer for placing an unarmed black man, Eric Garner, in a chokehold. (Samira Bouaou/ Epoch Times)
US

Students at a number of top U.S. law schools have asked that winter-term deadlines be extended because they are upset over the recent grand jury decisions in the Eric Garner and Michael Brown cases.

“We have no faith in our justice system, which systematically oppresses black and brown people,” read a Dec. 7 letter from the Harvard Law School Affinity Group Coalition to the university’s administration. “We are afraid for our lives and for the lives of our families. We are in pain. And we are tired.”

In the letter, the coalition—which represents ethnic minority law student organizations at Harvard—asked for exam extensions, mental health support, and ongoing forums for discussion as well as safe spaces. The request for exam extensions was similar to one granted in 1970 by Harvard Law School faculty when all exams were delayed upon a request from students taking part in anti-war protests.

McKenzie Morris, president of the Harvard Black Law Students Association, said in an email to Epoch Times that the students’ reaction to both the Brown and Garner cases was based on both legal reasoning and life experience.

“Students were devastated when the Ferguson grand jury decision came out,” wrote Morris. “When the Garner decision came out, we were absolutely distraught. Pouring salt into an already open wound doesn’t even come close to the devastation we and so many Americans felt. Each decision, and so many other cases, are collectively the reason why we are working so hard to try to make change.”

Morris added that the Garner case in particular caused “heightened concern” over law enforcement accountability because students had been “hopeful that cameras on cops would help toward that accountability.”

New York City, where Garner died while being arrested by police, just launched a pilot program for body-worn police cameras. Nine of the 54 pilot cameras are already being worn by police in the precinct where Garner died. His death was filmed by two different bystanders with cellphones.

“The Garner case, to some extent, has devastated that hope,” said Morris. “It has shed light on a topic to many Americans who never believed these stories before. Because people can finally see with their own eyes what many of us have known all along, more people are joining the collective effort to demand change to our criminal justice system.”

Law school students at other universities including Stanford, Yale, New York University, and the City University of New York have made similar requests to their law school deans. Columbia University has been the only one to grant an extension.

In response to an Epoch Times inquiry, Columbia Law School spokeswoman Elizabeth Schmalz said in a written statement that “a small number of exams have been rescheduled” for later in December. She added that as an institution, however, the law school feels there are larger issues at hand than tests.

“Focusing on routine matters such as exam schedules … diverts attention away from the real issue that should be examined now: how to ensure a criminal justice system that protects fairness, due process, and equality.”

She added that the university respects students’ “serious efforts to raise questions of racial injustice that are central to their education as lawyers.”