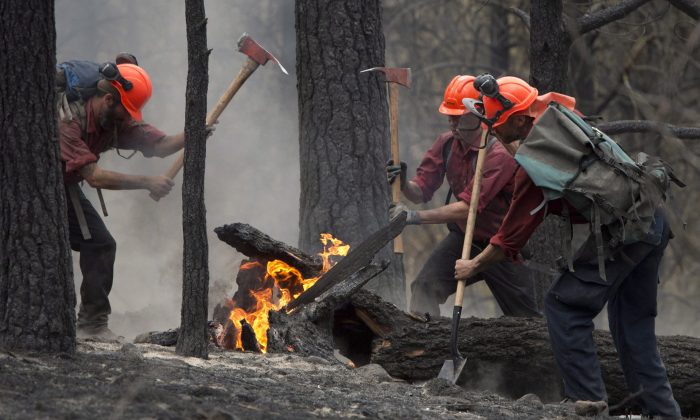 A constitutional rights group says it is prepared to take legal action against a regional government in B.C. if it does not accommodate a local volunteer firefighter who asked to be exempt from its mandatory COVID-19 vaccine policy on the basis of religious grounds and natural immunity.

On April 28, the Justice Centre for Constitutional Freedoms sent a legal warning letter to the Columbia Shuswap Regional District (CSRD), demanding “reasonable accommodation” to Crag Nygard for exemption from its vaccine mandate for all staff, including paid on-call volunteer firefighters.

“Mr. Nygard’s work as a firefighter is extremely important to him. Providing such an essential service to the community fulfills his wish to contribute to society and to be of service to mankind,” says the letter.

The document notes Nygard is seeking an exemption to the mandate on the basis of “sincerely held religious beliefs” as well as “having natural immunity to the SARS-CoV-2 virus” after contracting COVID-19 last summer.

To date, about 30 volunteer firefighters in CSRD have been terminated from their positions for not receiving COVID-19 shots, according to Nygard, the letter added.

“CSRD is doing a disservice to the community by denying volunteer firefighters and losing their volunteer services,” Le Beau said in a press release on May 3.

The CSRD implemented its vaccination policy on Nov. 18, 2021, following a unanimous vote by its board of directors.

On Dec. 3, 2021, the district said its fire protection services were not disrupted even though “some of its firefighters opt for a leave of absence rather than provide proof of vaccination.”

The district’s vaccine policy states that individuals who do not provide proof that they are fully vaccinated, have not requested or are not entitled to accommodation under the policy by Jan. 3, will be placed “on unpaid administrative leave of absence, requiring the Personnel to complete a mandatory public health training, and/or meeting with a CSRD appointed medical professional.”

In an emailed statement to The Epoch Times on May 4, the CSRD said accommodations for legitimate medical reasons, as well as protected grounds under the B.C. Human Rights Code—which includes religious grounds—is recognized in the policy.

“We are happy to work through the process with any of our firefighters who are seeking an exemption under these provisions. As stated in the policy, requests for accommodations will be considered on a case-by-case basis,” said spokeswoman Tracy Hughes.

“He advises that he has submitted a request for religious exemption to you, but that his request was denied. He also advises that you do not accept natural immunity as a reason for exemption from the vaccine,” the lawyer said.

Le Beau added that Nygard has researched the risks and benefits of receiving the COVID-19 shots.

“He has learned that the Covid-19 vaccines available at this time carry substantial risks including severe allergic reactions and death, and they have warning labels from Health Canada for the conditions of myocarditis, pericarditis, blood clots, and Bell’s Palsy,” she wrote.

Sutherland said in a press release last December that the district’s decision to implement the vaccine mandate was for the safety of the staff and the public.

“This policy was put in place by the Board because vaccines are among the best methods of protecting the health and safety of you, and those around you, from the risks of COVID-19,” he said.

‘Do Not Own or Control People’s Bodies’

The letter by Le Beau argued that Nygard is unable to consent to receive any COVID-19 shots against his conscience and religious convictions. Among Nygard’s concerns include the use of abortion-derived fetal cells as part of the development or testing for certain vaccines.

“His sincerely held beliefs prohibit him from participating or benefiting from an abortion, no matter how remote in time that abortion occurred,” the letter said.

In addition, Le Beau said Nygard is protected under section 7 of the Canadian Charter of Rights of Freedoms, which guarantees an individual’s rights to bodily autonomy.

“Ownership and autonomy over the body and the ability to freely choose what does or does not enter one’s body is a critical aspect of individual and religious liberty,” she wrote.

“Government agencies do not own or control people’s bodies and must never be permitted to act as if they do by coercing anyone to take Covid-19 vaccines without their consent, and by penalizing them if they refuse.”

Le Beau said the evolving science does not support a vaccine mandate.

“It is clear now that the Covid-19 vaccines do not prevent transmission or infection of the virus, and there are numerous studies to prove that assertion,” she said, citing a study published by the Lancet in January, arguing vaccines that permit transmission “do not confer sterilising immunity.”

“Furthermore, the BC Covid Therapeutics Committee, which reviews and critically appraises evidence on the use of therapies in the management of COVID-19, has stated… that ‘[p]revious infection alone is equivalent to 2-dose vaccination without a booster.’”