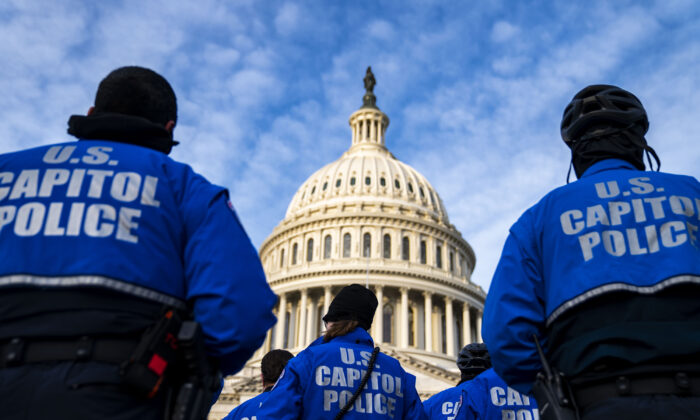 U.S. Capitol Police officers on the East Front Plaza after a morning roll call on Capitol Hill in Washington on Jan. 6, 2022. (Kent Nishimura/Los Angeles Times/TNS)
US

Federal agencies created at least 26 intelligence reports ahead of Jan. 6, 2021, forewarning about potential violence on Capitol Hill, according to a recent report from the Government Accountability Office (GAO).

The GAO report, released earlier this month, examined 10 federal agencies and their role in obtaining and sharing open-source information before the events of Jan. 6, 2021. Senior law enforcement officials have blamed a lack of intelligence for why law enforcement seemingly wasn’t prepared, but the GAO report said the U.S. government had at least 26 reports forewarning about violence in the days and months before the event.

“All 10 selected agencies—including the FBI and the Department of Homeland Security (DHS) Office of Intelligence and Analysis, which have lead roles in countering domestic terrorism and violent extremism—were aware of open-source data about planned events on January 6 and seven were aware of potential violence planned for that day,” the May 2 report said.

“They obtained the data through manual web searches, sharing with each other, and social media platforms.”

The GAO report said the 10 agencies—which also include the U.S. Capitol Police, Secret Service, and the U.S. Postal Inspection Service (USPIS)—created 38 election-related “threat products,” which are intelligence reports based on open-source data collection and social media analysis. Of the 38 threat products, 26 were related to Jan. 6, according to the GAO.

“For example, prior to January 6, the FBI reviewed information regarding an online threat that discussed calls for violence, including, ‘Congress needs to hear glass breaking, doors being kicked in, and blood … Get violent … Go there ready for war.’ In addition, in mid-December 2020, DHS’s Office of Intelligence and Analysis received information regarding threats to Congress and elected officials and discussions of bringing guns into D.C. on January 6,” the report said.

“Further, one agency received data from a social media platform [Parler] on December 24, 2020, that included a user threatening to kill politicians and coordinate armed forces on January 6.”

“In addition, the U.S. Capitol Police disseminated a report on January 5, 2021, identifying 12 protests scheduled to occur on Capitol grounds related to the counting of electoral votes—six of which received permits through the U.S. Capitol Police Special Events Division. The report identified that the Million MAGA March was scheduled to occur at the Freedom Plaza on January 6, 2021.

“Using social media analysis, the U.S. Capitol Police noted that the event attendance would include up to 2,000 additional participants more than the 5,000 participants reported to the National Park Service on the permit application,” the GAO report said.

The GAO said its report was completed in February, but some agencies deemed certain information too sensitive to release to the public.

The analysis is the fifth in a series of GAO six reports about Jan. 6, 2021. The office said its final report will assess the extent to which agencies used threat-related information to prepare security measures for the events of Jan. 6.

Previous reports include criticisms against law enforcement for failing to adequately prepare for the event.

Jan. 6 saw protesters breach the Capitol during a joint session of Congress, interrupting the counting of electoral votes from the 2020 election. Over 140 officers were injured, over $1.5 million in damage was done, and four people died, including a supporter of former President Donald Trump who was shot by a Capitol Police officer.