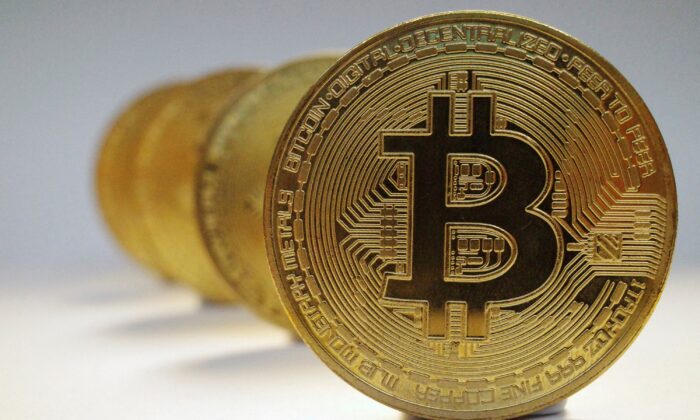 A representation of the virtual cryptocurrency Bitcoin, picture illustration taken on Oct. 19, 2021. (Edgar Su/Reuters)
US News

Law Enforcement Seize $3.6 Billion in Bitcoin Stolen From Bitfinex in 2016

The U.S. Justice Department (DOJ) said on Tuesday that officials seized a record of over 94,000 bitcoin, which was stolen from Bitfinex in 2016, and that is currently valued at $3.6 billion.

Officials also arrested two people in connection with the 2016 hack of the virtual cryptocurrency exchange.

Ilya Lichtenstein, 34, and his wife, Heather Morgan, 31, both of New York, were scheduled to make their initial appearances in federal court in Manhattan on Tuesday.

The couple is charged with conspiracy to commit money laundering and conspiracy to defraud the United States and face up to 25 years in prison if found guilty.

“Today, federal law enforcement demonstrates once again that we can follow money through the blockchain, and that we will not allow cryptocurrency to be a safe haven for money laundering or a zone of lawlessness within our financial system,” said Assistant Attorney General Kenneth A. Polite Jr. of the Justice Department’s Criminal Division.

According to court documents, Lichtenstein and Morgan allegedly conspired to launder the proceeds of 119,754 bitcoin that were stolen from Bitfinex’s platform after a hacker breached Bitfinex’s systems and initiated more than 2,000 unauthorized transactions.

The stolen bitcoins were sent to a digital wallet under Lichtenstein’s control, prosecutors said.

Approximately 25,000 of the stolen bitcoins were transferred out of Lichtenstein’s wallet through a series of laundering transactions over the last five years.

Prosecutors said that Lichtenstein and Morgan employed “sophisticated laundering techniques” to move the money, which included using fake identities to set up online accounts and using computer programs to automate transactions, the latter of which allows for multiple transactions to take place in a short period of time.

They also employed “chain hopping” whereby money is converted from one cryptocurrency into another to make it less traceable, according to prosecutors.

This ended with some of the stolen funds being deposited into financial accounts controlled by Lichtenstein and Morgan, prosecutors said.

The rest of the stolen funds, comprising of more than 94,000 bitcoins, remained in the wallet and were used to receive and store the illegal proceeds from the hack, the Justice Department said.

Officials gained search warrants for the online accounts controlled by Lichtenstein and Morgan and which contained the private keys that allowed them to lawfully seize and recover more than 94,000 bitcoins that had been stolen from Bitfinex, prosecutors said.

“In a methodical and calculated scheme, the defendants allegedly laundered and disguised their vast fortune,” said Chief Jim Lee of IRS-Criminal Investigation (IRS-CI). “IRS-CI Cyber Crimes Unit special agents have once again unraveled a sophisticated laundering technique, enabling them to trace, access, and seize the stolen funds, which has amounted to the largest cryptocurrency seizure to date, valued at more than $3.6 billion.”

The seizure comes after hackers made off with roughly $320 million in cryptocurrency from Wormhole, an interoperability protocol that acts like a bridge between assets and blockchains, last week.

Wormhole, which offered the hacker a $10 million bug bounty to return the funds, later said that “all funds are safe.”

Earlier this month, the Internal Revenue Service warned that cryptocurrencies, as well as non-fungible tokens (NFTs), a digital asset that uses blockchain technology to record the ownership status of digital objects, are highly susceptible to fraud and manipulation.

In a statement on Tuesday, Bitfinex said it had been cooperating with DOJ since its investigation began and was pleased to hear its announcement regarding the recovery while thanking the DOJ for its “dedication and hard work” that led to this great success.