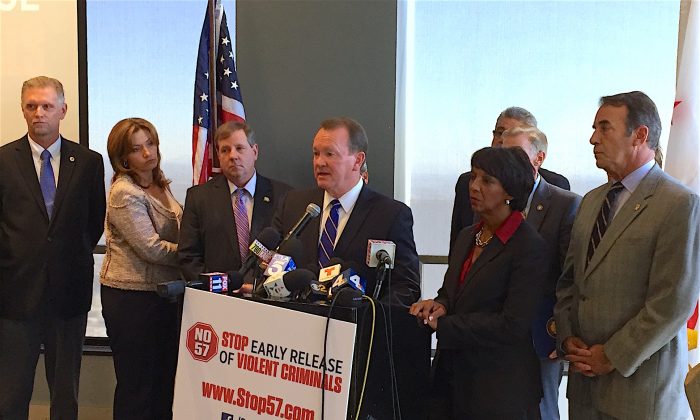 LOS ANGELES—Law enforcement officials and city leaders met on Thursday, Oct. 20 to denounce a November ballot measure designed to allow “nonviolent” criminals early access to parole, saying not all of those criminals would actually be nonviolent, putting communities in increased danger.

“What we’re seeing here is an opportunity for people who have committed terrible, terrible crimes to be eligible to be released back into our communities without any support for them, without any rehabilitation,” said Los Angeles County Sheriff Jim McDonnell of Proposition 57, along with District Attorney Jackie Lacey and others.

Some of the crimes that law enforcement officials say would fall under the “nonviolent” category according to the California penal code include rape of an unconscious person, human trafficking, drive-by shooting, assault with a deadly weapon, domestic violence with injury, arson, and attempting to explode a bomb at a hospital or school.

According to the website Ballotpedia’s Verbatim fact check, “State law treats many seemingly violent crimes as ‘nonviolent.’ Therefore, unless amended, Proposition 57, if approved, could provide early release to inmates whose crimes are not designated as ‘violent’ under state law but whose criminality involved actions that would commonly be regarded as violent.”

In addition, Prop. 57 would also allow the Department of Corrections to give credits for good behavior and approved rehabilitative or educational achievements to all inmates, violent or nonviolent.

“Do we really need more parolees and hardcore criminals on the streets?” he said.

The Legislative Analyst’s Office calculated that about 30,000 state prison inmates would be affected by the parole provisions of the ballot measure, with 7,500 individuals admitted to prison each year eligible for parole consideration two years later.

California Governor Jerry Brown and other supporters of the measure say Prop. 57 is desperately needed after California’s prisons were declared overcrowded and unconstitutional by the US Supreme Court and the federal government ordered California to reduce its prison population in 2009 and 2011.

“Without a common-sense, long-term solution, we will continue to waste billions and risk a court-ordered release of dangerous prisoners,” states the ballot argument in favor of the measure. “This is an unacceptable outcome that puts Californians in danger.”

However, according to the Public Policy Institute of California, the state had already reduced its prison population to federally mandated levels as of March 2015.

Supporters of the measure also say that if the proposition passes, parole commissioners, who are appointed by the governor, will ultimately decide who is actually given parole, providing a safety net to screen out those who may be less qualified.

However, this doesn’t convince local law enforcement that the measure is a good idea.

“Over the last couple of years, we’ve noticed the parole board has been very liberal about recommending who gets parole,” said District Attorney Lacey. “We’re just worried about those decisions being arbitrarily made and putting people out there early we don’t want.”

California saw a 10 percent violent crime increase in 2015, and Sheriff McDonnell said he believes a different ballot measure was “a very significant contributor,” making him very suspicious about this one.

“We’ve seen what’s happened in the last few years with AB 109 Realignment and Proposition 47 where the public was promised one thing, and what we’ve seen as unintended consequences, something entirely different,” said Sheriff McDonnell.