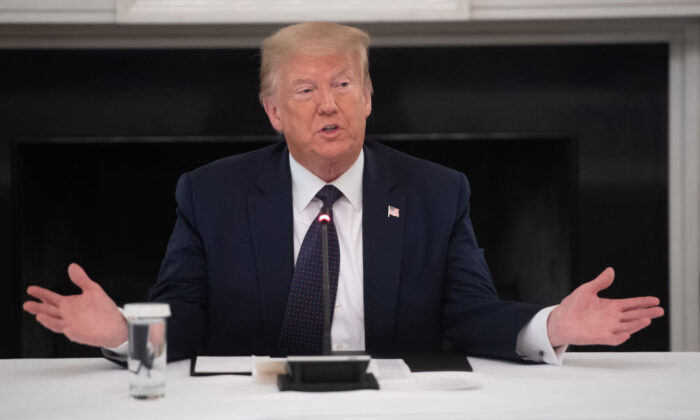 President Donald Trump hosts a roundtable discussion with law enforcement officials on police and community relations in the State Dining Room at the White House in Washington on June 8, 2020. (Saul Loeb/AFP via Getty Images)
By Venus Upadhayaya

In a round table meeting with President Donald Trump and White House officials on June 8, the law enforcement officials expressed their support for reforming the criminal justice system and the profession of policing in the wake of the protests around the country over George Flyod’s death in police custody.

“Looking at us as a profession, we recognize that it’s time for us to have some good, deep discussion and look within and find ways to improve the criminal justice system,” said Patrick Heels, the national president of the Fraternal Order Police.

Heels said that the last year had been a very tough time for law enforcement, having first to deal with the CCP virus pandemic, in which it lost 117 officers exposed to the virus across the country, and now, the social unrest sparked by the death of Floyd.

“I don’t know a law enforcement officer across this country who is not just appalled by the incident that occurred in Minneapolis. But that one incident certainly doesn’t reflect on the 800,000 men, women across this country who go to work every single day and try and make their communities better,” said Heels when thanking Trump for the chance to have an in-depth dialogue on the current situation.

Florida Attorney General Ashley Moody said that her state has been experiencing the lowest crime rate in 48 years, and that recent attacks on law enforcement and looting could “dismantle” all the progress made over many years.

“I believe that in any administration and any criminal justice system in any state, we can always make improvements,” Moody said, adding that this didn’t detract from the great myriad of things that the majority of law enforcement officials do for their community.

“I mean, if we expect great things, we have to support them. We have to ensure that they’re safe. At the same time, we must remain committed to improving our system,” she said.

Sheriff Tony Childress of Livingston County, Illinois, talked about a few specific reforms that he thinks would have a very important impact on law enforcement practices in his county.

“Some of the things we feel in Livingston County will be very important is mandatory de-escalation training for officers, the prohibition of all physical restraint maneuvers on or above the neck, any physical acts that reflect the flow of blood or oxygen to the brain, requiring all officers to render medical aid to all people, and requiring officers to intervene when physical forces are being applied to either stop or attempt forces that are being inappropriately applied,” said Childress.

The Livingston Country sheriff told Trump that he looks forward to working with the administration to make these things enforceable by law.

Kentucky Attorney General Daniel Cameron told the round table that they have a responsibility “to do it better.”

Deputy Assistant to the President and Deputy Director of the Office of American Innovation, Ja’Ron Smith, said that he lives in a paradox as a black American. He said his wife has experienced being afraid of venturing out of their house in Washington by herself, and that he has at times feared visiting certain neighborhoods and “driving certain types of cars as an African American. But at the same time, Smith said he fundamentally believes that law enforcement is there to help and protect everyone. They’re “not to be demonized,” he said.

“I have a lot of law enforcement individuals in my life, and they’re some of the greatest people I’ve ever met, and we can’t let some bad apples represent something that a core of every community,” Smith said.