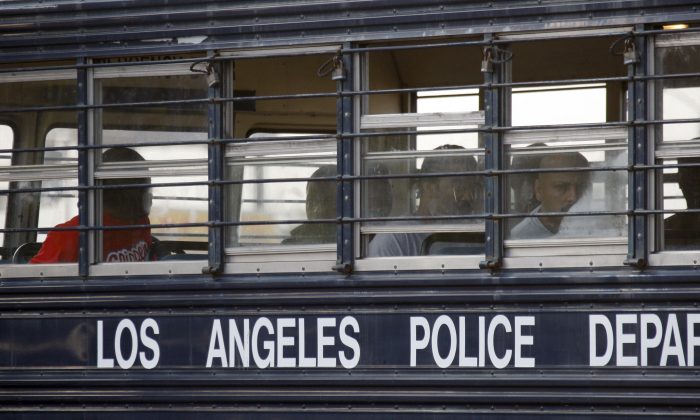 Suspected gang members sit in a bus after their arrest by members of a task force from the Los Angeles police department and the FBI in Los Angeles on May 19, 2011. (AP Photo/Nick Ut)
US

Law Enforcement Comes Together to Learn About Dealing With Gang Crime

LOS ANGELES—Although violent crime in general, including gang crime, is on a downward trend in LA, 58% of homicides in 2013 were gang-related. Law enforcement officials said on Tuesday that the city still has a long way to go to curb gang violence.

Wes McBride, executive director of the California Gang Investigators Association, said one of the biggest issues in police gang units is the high officer turnover rate. The environment is highly stressful and strategies to combat gang violence are not easily adopted from other police gang units because of regional differences. For example, gangs in New York are more involved in territorial violence, while gangs on the West coast are more heavily involved in drug trafficking through Mexico and Central America.

“What happens in LA may not be what’s happening on the East Coast, but there are similarities,” he said.

According to Jim McDonnell, the Chief of the Long Beach Police Department, officer partnerships and regular communication are exactly what are needed most to keep a healthy mental attitude in such a high-stress environment.

“In the gang environment, you see things that are completely senseless—people doing shootings, people taking advantage of other people. In the case of sex trafficking, doing things that you just shake your head and you say, ‘I can’t believe that this person thinks that that’s acceptable in any way,'” he said.

McBride, McDonnell and around 900 other law enforcement professionals from 21 US states, as well as France and Canada, came together for the 23rd Annual National Gang Conference in Anaheim, Calif. on Tuesday.

The conference is a place where patrol officers and detectives, primarily from the Southern California region, can share effective strategies for reducing gang violence and emerging trends in gang activity.

McDonnell said gang crime has become more sophisticated recently, which is why these conferences are needed.

“We’ve seen a lessening of the outright violence that we saw back in the earlier days,” he said. “They’re getting involved in computer crime, cybercrime, cases of fraud, sex trafficking. Things that are more under the radar.”

In addition, gang violence is not limited to the well-known Latino and African-American gangs; gang violence and organized crime problems exist among many ethnic groups. For example, there are also Asian, white supremacist, and Armenian gangs.

McDonnell stressed that everyone has a responsibility to prevent crime, not just the police.

“The police are an extension of the community we serve,” he said. “Too often people know what’s going on in their community, and they’re either afraid or unwilling to come forward and share that with the police.”