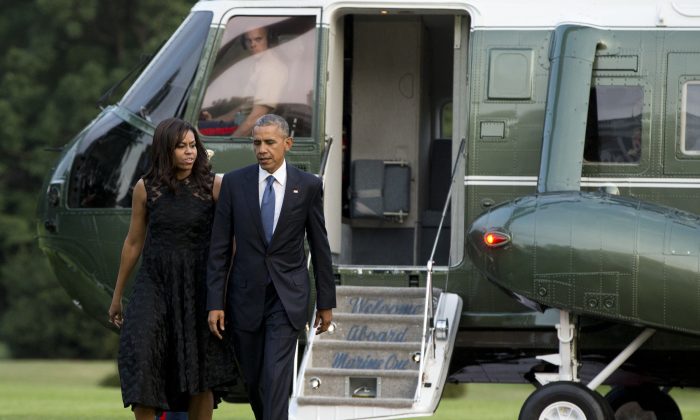 President Barack Obama and first lady Michelle Obama walk across the South Lawn of the White House from Marine One, Tuesday, July 12, 2016, in Washington, as they return from Dallas where they attended a memorial service for five fallen Dallas police officers. (AP Photo/Carolyn Kaster)
US

Law Enforcement, Activists to Meet With Obama at White House

WASHINGTON—President Barack Obama will quickly return to the delicate balancing act of supporting law enforcement while addressing concerns of bias from some of the communities they serve.

Obama is meeting Wednesday with police officers at the White House — the second such session this week. This time it will be expanded to include mayors, academics and civil rights activists.

“We’ll share solutions from communities that have already found ways to build trust and reduce disparities,” Obama said on Facebook.

Obama and Vice President Joe Biden met with representatives from eight police organizations Monday before flying the next day to Dallas to lead a memorial for five police officers killed by a suspect who said he wanted to kill whites, particularly white officers. The officers were working at rally in which protesters gathered to voice complaints about the shooting deaths of two black men by police officers, one in Baton Rouge, Louisiana, and the other in Minneapolis, Minnesota.

“Going forward, I want to hear ideas from even more Americans about how we can address these challenges together as one nation. That means you,” Obama said.

He is calling on people to submit their stories and ideas to go.wh.gov/VDPvKz.

Biden told CNN after Monday’s meeting that a couple of the police groups at the meeting voiced some displeasure with the president while others told him he was “doing it just right” with his comments. Biden did not offer detail about the complaints, but said Obama stressed how he has repeatedly voiced support for law enforcement and offered to send critics a list of when he has done so.

Biden said Obama asked the police officials at the meeting: “Fellas, what do you think I’m not doing? What have you not heard me say?”

White House spokesman Josh Earnest said the president is hoping to push the conversations toward concrete actions that the government and communities can take.

“Even the most optimistic assessment of what could happen tomorrow doesn’t leave anybody concluding that all the problems are going to be solved,” Earnest said aboard Air Force One as it headed to Dallas. “But the president is hopeful that while the country is focused on this issue, that we can reprioritize and re-energize the search for common ground.”