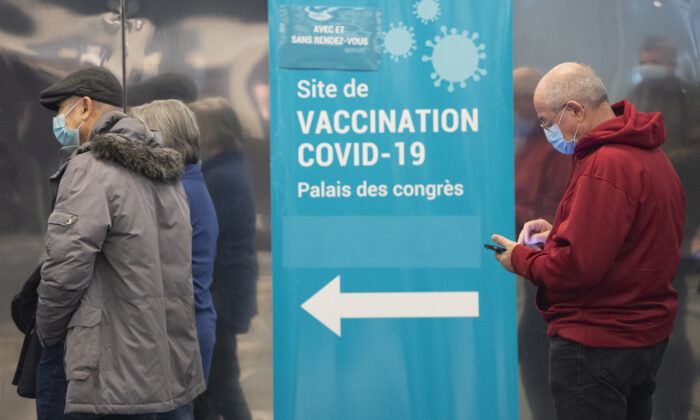 A Quebec university professor of infectious diseases who was suspended during the summer for calling into question the need to vaccinate children against COVID-19 is facing a new disciplinary threat for similar comments he made on a radio show while under suspension.

Patrick Provost, a full professor at the Department of Microbiology and Immunology at Laval University, was suspended for eight weeks without pay in June by his employer for comments he made in December 2021.

Provost had said during a public event that the risks of vaccinating children against COVID-19 were greater than the benefits.

While on suspension in mid-July, Provost made similar comments during an interview with Quebec radio station CHOI 98.1 Radio X.

“The effectiveness of vaccines is negative in Quebec since December 2021 (the government deleted this data from its reporting not long after…). This means you have more risk to get infected if you’re vaccinated,” Provost wrote in a Facebook post commenting on his appearance on the show.

“It’s quite the opposite of a traditional vaccine. Why choose vaccination?”

Provost was addressing a common theme across provinces where COVID-19 data by vaccination status has been removed from public view. When still available, Ontario data, for example, suggested that individuals who received a booster were getting infected at twice the rate per 100,000 people as the unvaccinated or those who received two doses.

Health Canada says that “evidence indicates that the benefits of COVID-19 vaccines continue to outweigh the risks of the disease.” The statement is not stratified by age group.

Following Provost’s radio appearance, an individual submitted a complaint through the university’s security denunciation portal, according to files obtained by The Epoch Times.

“Decidedly, your professor didn’t learn from his suspension, doubling down with a disinformation interview,” says the complaint. “Especially when he says the vaccine is worse than the disease for children and that they’re not even a vector, among other things.”

On Aug. 4, the university sent a letter telling Provost it deemed the complaint admissible on the grounds it contains an explanation of the accusations, the accusations are related to the teaching functions of the professor, the complaint was signed and dated, and it identifies the respondent.

The letter said that if the complaint is valid, Provost would have broken university policies such as not “respecting academic freedom,” lacking “rigour,” or not sharing research results in a “responsible” manner.

The letter, signed by vice-dean of human resources and finance André Darveau, outlines the steps to process the complaint, including meeting with Provost to hear his version of events and a potential investigation by a committee.

Provost told The Epoch Times in an email that the current process is identical to the previous one that led to his suspension. He says he expects a harsher suspension or dismissal.

“Laval University will accept any kind of complaint to get rid of me… They found a way to do it by following the same recipe…” says Provost.

Laval University spokesperson Andrée-Anne Stewart told The Epoch Times in an emailed statement that she would not comment on Provost’s personal file.

Stewart said the university leans upon the two “fundamental principles” of the right to academic freedom and freedom of expression to accomplish its mission.

She also highlighted the province’s new law on academic freedom adopted in June, which requires universities to put in place dedicated committees. Stewart said establishing such a committee is in the works.

Provost said that his academic freedom has not been respected.

“Beyond my position against the vaccination of children for COVID-19, it’s the issue of academic freedom that’s in danger,” he says.

Provost has had the backing of his SPUL union on the issue since his first run-in with the administration.

For the latest dispute, SPUL lawyers from the Poudrier Bradet cabinet sent a cease-and-desist letter to Laval Vice-Dean Darveau on Aug. 29 highlighting procedural issues in the way the complaint was submitted.

The lawyers argue the denunciation portal, which is for security-related matters, cannot be used to signal an academic issue. The plaintiff did not sign his complaint, nor did he spell his name correctly.

A review of the family name by The Epoch Times shows two mistakes or typos.

The lawyers are casting doubt on the authenticity of the complaint.

Lawyers also argued that a labour arbitrator has already been appointed to assess the summer suspension, and that Provost filed a psychological harassment grievance on Aug. 25 over the university’s Aug. 4 letter.

University lawyers from the Cain Lamarre cabinet replied on Sept. 1, reiterating the institution’s position that the complaint is admissible and its demand to have Provost deliver his version of events in a meeting. It also acknowledged the grievance filed by Provost.

“Rest assured that our client is attentive to respecting the entirety of its legal obligations in this regard,” says the letter from Cain Lamarre.

Nicolas Derome, a professor of molecular biology, also questioned the need to vaccinate children during a public talk in November 2021.

Derome had presented data showing children are at low risk of COVID-19 complications.

The under-20-years of age category accounts for 0.0 percent of COVID deaths in Quebec as of Sept. 14, according to official data.

Since their suspension, Derome, Provost, and others have co-authored an article published in a medical journal arguing that a conscientious objection to mRNA injections is valid based on the unknown dose and biodistribution of the product.

“Unlike a drug produced in a pharmaceutical factory and formulated at a known dose and a well-defined protein product profile, the mRNA vaccine acts as a pro-drug encoding for the viral Spike protein of the virus to be produced by our own cells; both the dose and the quality of the proteins produced are unknown,” wrote the authors in the article published on Aug. 23 in the International Journal of Vaccine Theory, Practice, and Research.

“We also ignore the distribution of the lipid nanoparticles carrying this mRNA in our body. We consider that the ‘conscientious objection’ raised by the above considerations is a reason enough to refuse mRNA vaccines or similar technologies as a preventive treatment against COVID-19.”

While vaccination of all children over 6 months old with mRNA shots is encouraged by Health Canada, other jurisdictions have started to change their approach.

The UK National Health Service (NHS) says that children who turned 5 after Sept. 1 can only get a COVID-19 vaccine if they’re at high risk due to a health condition or a weakened immune system, or if they live with someone who’s immunocompromised.

Denmark has stopped COVID vaccination of the under-18 since July, saying a very limited number of high-risk individuals could still receive it following the assessment of a doctor.

Denmark has also stopped recommending the injections for those under 50, saying only those above that age and with special circumstances will be offered vaccination.