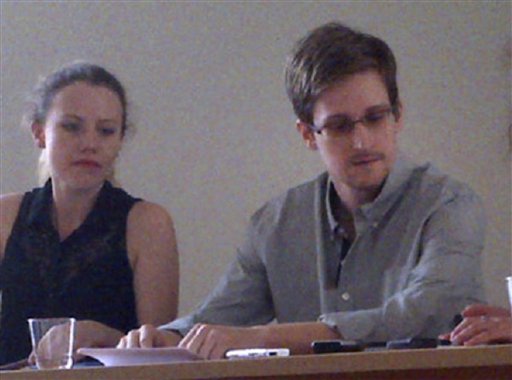 In this image provided by Human Rights Watch, NSA leaker Edward Snowden, center, attends a news conference at Moscow's Sheremetyevo Airport with Sarah Harrison of WikiLeaks, left, Friday, July 12, 2013. The whole time Snowden has been seeking asylum, Harrison has been by his side. She has emerged as a central, if mysterious, figure in the saga that has taken Snowden across the world in an attempt to evade U.S. espionage charges. (AP Photo/Human Rights Watch, Tanya Lokshina, File)
Tech

Lavabit, the e-mail service reportedly used by NSA leaker Edward Snowden while he was in Russia, has been shut down.

Ladar Levison, the owner an operator of the service, wrote on his website that he shut it down to not become “complicit in crimes against the American people.”

“ I have been forced to make a difficult decision: to become complicit in crimes against the American people or walk away from nearly ten years of hard work by shutting down Lavabit. After significant soul searching, I have decided to suspend operations,” he wrote.

He added: “I wish that I could legally share with you the events that led to my decision. I cannot. I feel you deserve to know what’s going on–the first amendment is supposed to guarantee me the freedom to speak out in situations like this.”

“Unfortunately, Congress has passed laws that say otherwise. As things currently stand, I cannot share my experiences over the last six weeks, even though I have twice made the appropriate requests,” he continued.

It appears that Levinson is implying that the U.S. government tried to access information about Lavabit, according to The Verge.

“What’s going to happen now? We’ve already started preparing the paperwork needed to continue to fight for the Constitution in the Fourth Circuit Court of Appeals. A favorable decision would allow me resurrect Lavabit as an American company,” he wrote.

According to Business Insider, Lavabit was created in 2004 to allow users to send super-encrypted e-mails amid privacy concerns about Gmail, Google’s e-mail service.

“At the time, Lavabit’s founders felt Gmail was a great service but that Google was actively violating the privacy of its users by displaying ads related to keywords in their e-mail,” read a statement on its website before it was taken down.