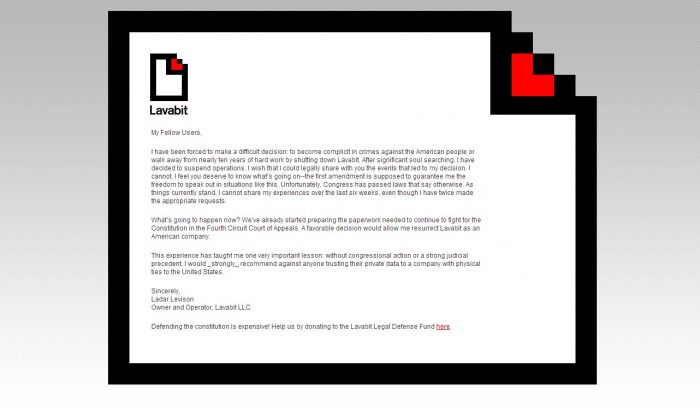 Lavabit and alternative Silent Circle also shut down their secure e-mail services. Lavabit–reportedly used by Edward Snowden to send encrypted e-mails from Russia–abruptly closed down on this week, citing possible pressure from the U.S.

Both e-mail services shut down on Thursday, and each issued statements.

“I have been forced to make a difficult decision: to become complicit in crimes against the American people or walk away from nearly 10 years of hard work by shutting down Lavabit,” Ladar Levison, who owns and operates Lavabit, wrote on his website. “After significant soul searching, I have decided to suspend operations. I wish that I could legally share with you the events that led to my decision. I cannot.”

His message suggests that the U.S. government may have tried to access data on his servers. Levinson, however, did not elaborate.

Later, Silent Circle announced it would shut down its e-mail.

“We see the writing the wall,” Silent Circle wrote, referring to Lavabit’s closing down. “And we have decided that it is best for us to shut down Silent Mail now. We have not received subpoenas, warrants, security letters, or anything else by any government, and this is why we are acting now,” it added.

It continued: “We’ve been debating this for weeks, and had changes planned starting next Monday. We’d considered phasing the service out, continuing service for existing customers, and a variety of other things up until today. It is always better to be safe than sorry, and with your safety we decided that the worst decision is always no decision.”

The Electronic Freedom Frontier advocacy group wrote that “Lavabit’s ominous note and the lack of information about this case is especially concerning for users of large communication service providers like Facebook and Google that may well have been subject to similar pressure, and we hope they will continue to fight for the user in the face of government demands, even if not recognized for years.”

It added: “Moving forward, we need more transparency so the public can know and understand what led to a ten-year-old business closing its doors and a new start-up abandoning a business opportunity. Hopefully Congress will get concerned, especially when there are American jobs at stake. “