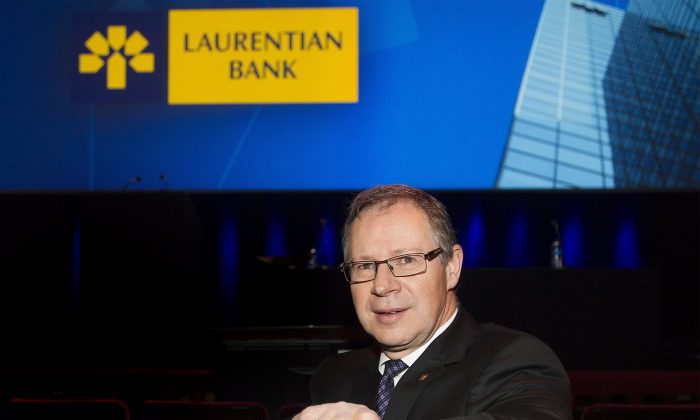 Laurentian Bank president and CEO Réjean Robitaille is shown here prior to the company's annual general meeting in Montreal on April 2, 2014. (The Canadian Press/Graham Hughes)
Canada

MONTREAL—Laurentian Bank is raising its dividend for the second time in a year after beating expectations by posting $39.4 million in adjusted profits, up slightly from the prior year.

The Quebec-based bank said Wednesday its quarterly payment to shareholders will increase a penny to 52 cents per share as of Aug. 1. It is the fourth of the seven largest Canadian banks to raise its dividend this quarter, following National, CIBC, and Bank of Montreal.

Laurentian earned $1.29 per diluted share in adjusted profits for the period ended Apr. 30, beating expectations by five cents. That compared with $1.24 per share or $39.25 million in the second quarter of 2013.

The bank was expected to earn $1.24 per share on $214.2 million of revenues, according to analysts polled by Thomson Reuters. With its results, all of the top Canadian banks beat analyst forecasts on adjusted earnings per share in the second quarter.

The bank said its return on equity was 9.2 percent for the quarter, compared with 10.4 percent a year ago.

“The sustained credit quality of the loan portfolio and rigorous control over expenses contributed to the good performance for the quarter,” he said in a statement.