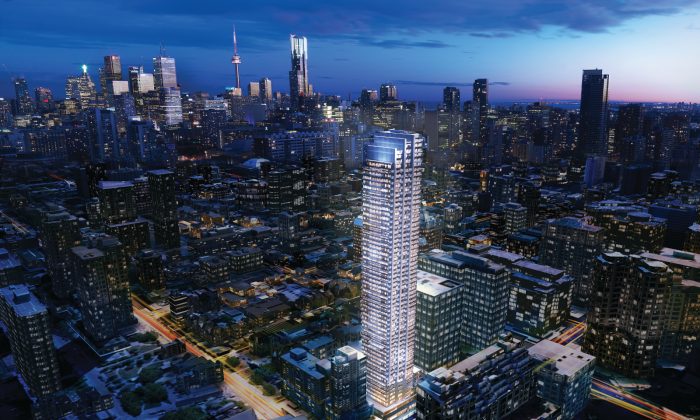 Rendering of The Rosedale on Bloor, which will have 476 units as well as a fitness centre, pool and yoga room, theatre room, lounge, and a rooftop terrace connected to an indoor kitchen with dining room. (Courtesy of Gupta Group)
Canadian Content

Launch of Rosedale on Bloor Draws Brokers in Droves

Steve Gupta can’t believe how many brokers turned out for the mid-September launch of his firm’s latest project, The Rosedale on Bloor.

“We had over 1,000 brokers—and platinum brokers,” the CEO of The Gupta Group and Easton’s Group of Hotels tells Epoch Times in an interview one week later at the companies’ Markham head office, noting that Chinese brokers comprised a substantial part of that crowd.

“We had people standing outside waiting to get in—a nice problem to have.” (The turnout was just slightly under what he witnessed at the debut of Dundas Square Gardens, 2014’s top-selling residential development.)

The Rosedale, among this year’s most highly anticipated launches, has 476 units ranging from 307 square feet to 871 square feet, with a significant number of two-bedroom suites, catering to right-sizing buyers coming from the surrounding area.

The condo will have a fitness centre, pool and yoga room, theatre room, lounge, and a rooftop terrace connected to an indoor kitchen with dining room, complete with two-sided fireplace.

A big part of the project buzz surrounds the Canopy by Hilton hotel that will occupy the tower’s bottom nine floors, the first location in Canada for this newly launched lifestyle brand. “We wanted something totally different that isn’t in Toronto,” Gupta explains, noting the hotel will appeal to Gen X and Gen Yers seeking an alternative to classic-style high-end hotels.

Condo residents at The Rosedale can access the hotel’s services (at an added cost), whether it’s the concierge, laundry or meals. But Gupta stresses that he sacrificed 16,000 square feet of retail space on the ground floor in order to create separate lobbies for the hotel and condo (leaving 4,000 square feet for a hotel bar-restaurant). “We didn’t want to mix the people going into the hotel with residents.”

But both hotel guests and condo residents alike will benefit from The Rosedale’s location, minutes from Yorkville and the rest of downtown, and a quick jaunt for motorists to Rosedale Valley Road, Mount Pleasant Road, and the Don Valley Parkway. “This will be like being in the middle of the action but also slightly away from it,” says Gupta.

The launch of The Rosedale is just the latest move for Easton’s / Gupta Group in an action-packed 2015.

Back in January the company bought a 3.2-acre property at 4050 Yonge Street and plans to transform the site—currently a TTC commuter parking lot at the northwest corner of Yonge and York Mills Road— into a seven-storey, 500,000-square-foot mixed-use development with 248-room full-service Hilton, a big boon for an area in dire need of a new hotel.

Dubbed Yonge Park Plaza, the complex will have ground-floor retail and office-condos above, and Gupta says it’ll be ideally suited for lawyers and accountants living in Hoggs Hollow (“they’ll love being able to park their briefcase and then go for meetings downtown by subway”) and medical professionals working at nearby Sunnybrook, North York General Hospital, and Humber River Regional Hospital.

The advantage of office-condos? “You won’t get bumped out,” says Gupta. “You never have to move and rent never goes up.” Plus, located where they are, these commercial condos are poised for significant appreciation. “Price-wise people will make money. In 15 to 20 years you won’t be able to touch it, it’ll be that expensive.”

Also earlier this year Gupta unveiled a hotel featuring two Marriott brands in one building: a Courtyard Marriott (for the business-transient market) and TownPlace Suites by Marriott (more extended, long-stay-oriented)—another first-in-Canada hotel concept. Easton’s Group acquired the old Holiday Inn at Woodbine and Steeles and gutted it back to concrete, putting in new bathrooms and replacing the HVAC systems.

And in June the company bought the Westin Bristol Place Toronto Airport on Dixon Road and will spend $9 million on a total gut and reno of its 288 rooms. (Easton’s also owns the Holiday Inn next door, one of 15 hotels in its portfolio.)

But the biggest news for the company could be the appointment last month of Gupta’s daughter, Reetu, as chief operating officer.

She joined the family business in 2005 after graduating with an MBA from York University’s Schulich School of Business, and for the past decade has served as vice-president of marketing and strategic development for both Easton’s Group and Gupta Group, overseeing management of its hotels and spearheading the move into condo developments (this includes King Blue, a two-tower project at King Street and Blue Jays Way that Gupta sold last year to China’s Greenland Group).

“It’s been a long time coming,” Reetu says about her new role, “but the fact my parents had faith in me to give me this title means a lot.”

“I always knew Reetu was very bright from day one—anything she does she excels at,” says her proud papa. “I have every confidence in what she can do.

“And at any company, you have to have a plan going forward—who will run it,” he adds.

Gupta’s not going anywhere (indeed, the man seems inexhaustible), but he says he feels “comfortable that she knows the values we have worked with all these years. What’s most important for us are our name and integrity and reputation—they can’t be compromised and she knows that; it’s embedded in her mind.”

Reetu Gupta has big plans for the company. “Hotels are our forte, so we won’t stray from that,” she says. “But in terms of development I’d like us to go international, first to the U.S., and one day Europe and India. That’s all on the radar.”

“She’ll take us to California, too,” her dad adds. “That’s been her dream since she was nine.”