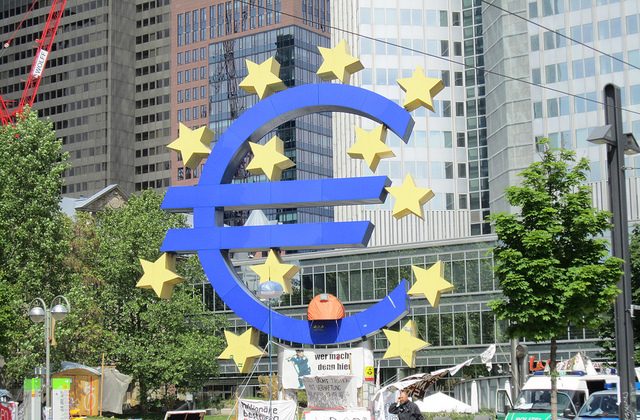 Fireworks exploded overhead and couples embraced in Riga, Latvia’s capital city, as Prime Minister Valdis Dombrovskis withdrew a €10 banknote early Wednesday morning to mark the country’s adoption of the Euro. The small Baltic state of just over 2 million inhabitants is the 18th country to join Europe’s monetary union and the second in the region after Estonia. Latvians, however, remain reserved about their new currency, lamenting another loss of sovereignty to Europe and fearful of price rises.

Prime Minister Dombrovskis hailed the new currency as, “a big opportunity for Latvia’s economic development.” When the country abandoned hopes of joining the Eurozone in 2008, few would have predicted the miraculous economic turn-around that would pave the way for the adoption of the Euro just a few short years later as much of Europe remained mired in crisis. “Today is… difficult to imagine three or four years ago,” said finance minister Andris Vilks.

The 2008 financial crisis brought about a severe recession that cut the country’s economic output by almost a quarter, the sharpest contraction in Europe at that time. Dombrovskis’ government was forced to request a €7.5 billion bailout from the International Monetary Fund and enact a slew of painful austerity measures.

Latvia only used some €4.5 billion of the original rescue package and has since become one of the EU’s fastest growing economies, expanding by an estimated 4% this year after two consecutive years of 5% growth. The Eurozone GDP fell by an estimated 0.5% in 2013 and is expected to remain sluggish in 2014, with growth estimated at a meagre 0.9% according to consultants Ernst&Young.

The healthy growth allowed Riga to quickly get its public finances back in order. The country now has one of the lowest levels of government budget deficit and debt in the EU at 1.2 %of GDP and 40.7% of GDP, respectively.

These positive economic indicators make Latvia one of only a handful of Eurozone countries to be in conformity with the Stability and Growth Pact. “Latvia’s strong economic recovery offers a clear message of encouragement to other European countries undergoing a difficult economic adjustment,” reported EU economic affairs commissioner Olli Rehn following the country’s adoption of the Euro.

The decision to adopt the Euro may be a positive indicator of the country’s economic health and future prospects, but it has not been warmly welcomed by a majority of the country’s citizens. A recent survey conducted by SKDS found that only 20% of Latvians supported membership in the exclusive monetary union, while 50% were outright opposed.

On a symbolic level, the adoption of the Euro represents a loss of sovereignty to Frankfurt, where the seat of the European Central Bank is located. Many remain attached to the country’s newly defunct currency, the lat, which was resurrected in 1992 to replace the Latvian rouble, a symbol of Russian dominance. The euro is the fourth currency for Latvia in just over two decades.

Some also worry that the Euro will lead to price hikes as shopkeepers translate prices into the new currency. This effect has been disproved by economic studies, but has nonetheless been a widespread concern in a number of different countries and remains a very tangible concern. One study by the European Commission found that 80% of Latvians believe that the euro will lead to higher prices.

This belief is further compounded by the fact that the EU is synonymous with ruthless austerity measures for many Latvians, even as the country has emerged from the crisis on solid footing. The austerity programme that helped get the country’s economy back in order, and subsequently allowed it to join the Eurozone, has also contributed to an increase in poverty levels, unemployment and emigration.