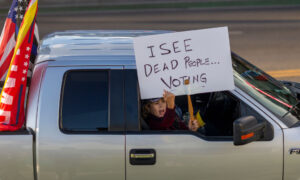 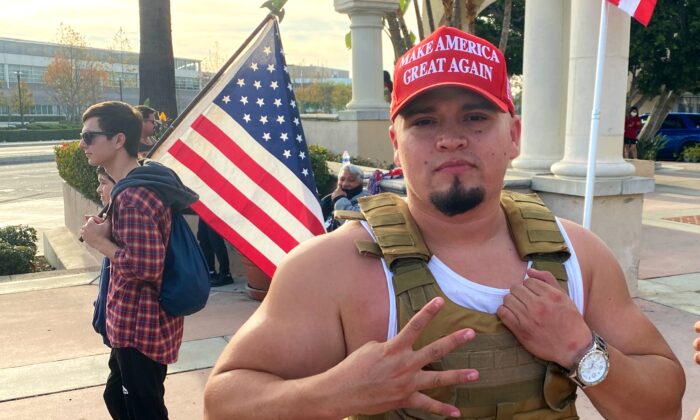 SANTA ANA, Calif.—A recent pro-Trump “Stop the Steal” rally in Santa Ana, attended largely by Latinos, was not business as usual in the working-class city.

Santa Ana is a Democratic stronghold. Among all cities in Orange County, it had the highest percentage of registered Democratic voters ahead of this election (about 53 percent versus 25 percent Republican) and voted most heavily in favor of Democratic presidential candidate Joe Biden (about 68 percent). Santa Ana is nearly 77 percent Latino, according to the U.S. Census Bureau.

Police estimate that about 40 to 60 people gathered on the corner of West 17th Street and North Bristol Street on Dec. 6. Protesters showed support for President Donald Trump and addressed allegations of voting fraud nationwide.

The crowd was met with derision from some passersby. Eggs hit the sidewalk in front of the protesters, hurled from a car. Some people yelled insults at the protesters or raised their middle fingers at them. The protest ended in a bloody fight between the crowd and three counter-protesters.

Alicia Rodriguez, 50, told The Epoch Times, “[I’m here] to support our president, because he still is our president, and to show Santa Ana that there are conservatives here. We stand for the Constitution. We want to be heard, and we’re not going to let them steal our vote.” She said she appreciates the freedom in the United States because her father escaped communism in Cuba.

“My family knows what it is to live in communism. … The manipulation and the lies—that capitalism doesn’t work, that you’re oppressing people—all of that was a lie they brought to Cuba,” Rodriguez said. “I don’t want this country turning into a communist country, and that’s where we’re at.”

Eric Derbsch, 48, of Laguna Hills, came to Santa Ana to support the protesters there. “This is the most liberal city in Orange County, and I want to show that we’re strong here,” he told The Epoch Times.

“We have people of all colors, too. And I knew that our Hispanic American and African American brothers and sisters would show up, and we stand with them. We stand with freedom.”

Derbsch said the group decided to hold the rally in Santa Ana “to show the liberals that we’re not gonna let you cheat. We have a voice too.”

He said it was sad to see the reactions of passersby. “I don’t mind if they drive by and they put their thumbs down, like ‘We’re not Trump fans.’ That’s OK. But the hostility—which I believe is driven by our public education system, the media, definitely politicians, and Hollywood—this is what drives it.

“We’re trying to bring people together, so that we can come together. We don’t need all that hate. And that’s another thing that we’ve got to overcome, and that doesn’t have to do with President Trump. It just has to do with society in general.”

Christine Shea, 56, told The Epoch Times that she’s “never seen fraud like this.”

Tony Bui emigrated from Vietnam to the United States decades ago. He said he came to the protest to support the integrity of the elections because of fraud and irregularities, to support Trump, and to clean up the system.

“A lot of us share the same feeling. We owe this country because this country is a place for opportunities for us to be good people,” Bui told The Epoch Times. “We have to come in support of the country when it is being jeopardized by the thugs. They are stealing the election.”

Others mentioned the biased media and the failed education system as reasons for their presence.

“It’s unfortunate that a lot of Californians don’t realize the liberty that we have and the freedom. They don’t teach that in our education system,” Freddy Atuatasy, 39, of Garden Grove, told The Epoch Times.

Bentley Fierro, 43, of Laguna Beach, said he supports the president because Trump is “a man of the people.”

“He’s one of us,” Fierro told The Epoch Times.  “The Democrats are communists. They’re socialists. Therefore, if Trump loses, that’s it. We’re gonna lose our rights. This will be a socialist nation.”

Anthony Alvarez, one of the event’s organizers, told The Epoch Times: “It seems like social media and big tech are basically trying to do anything they can to fact-check us, to silence us. So this is a way they can’t silence us, because we can protest peacefully.”

Observers told The Epoch Times that around 4 p.m., three Hispanic men showed up at the rally and began trying to steal flags. One person alleged that one of the men produced brass knuckles.

The crowd reacted, chasing the men down the street and beating them bloody with flag poles, before police responded to the incident.

René Avila was attending the rally with his wife and daughter when he saw the fight break out.

“It happened so fast, I caught it only when they were on the chase at the very end,” Avila, a U.S. military veteran, told The Epoch Times.

He said three men appeared and tried to take an elderly woman’s flag.

“The Trump ralliers came to her defense. They gave chase to the guys,” Avila said. “They got the beating of their life, and rightly so.”

Video footage shows the men, wearing face coverings, being pursued by the angry crowd and hit with flag poles. Police officers, who parked nearby prior to the altercation, responded to the incident.

“I was waving and we were screaming at them. We got their attention, and they whipped around. Before we knew it, they had maybe six to 10 squad cars there, and they apprehended and cuffed them up,” Avilia said.

Santa Ana Police Department Cpl. Anthony Bertagna told The Epoch Times that police subdued the three men and took them to the hospital for treatment.

“When we got there, we separated the three victims, who said they were assaulted. They got into an altercation with the crowd—for what, I don’t know,” Bertagna said.

“The three were sprayed with pepper spray and transported by medics to the hospital. One had a laceration on the forehead.”

In the end, “nobody was charged,” Bertagna said.

“They claim they were assaulted, but they don’t know by who. We didn’t locate any suspects. We don’t know if these three started it, or if it was the crowd that started it.”

“When the police showed up, the rally ended,” Bertagna said.