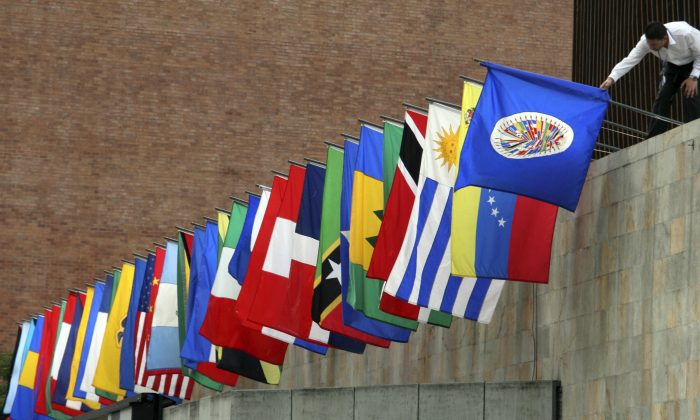 A worker prepares the flags of the Organization of American States (OAS) in Medellin, Colombia in this file photo. (RAUL ARBOLEDA/AFP/Getty Images)
Viewpoints

Latin America’s Version of the EU Is Useless

The pen may be mightier than the sword, but a pen doesn’t do much good in a knife fight.

Likewise, plentiful words and posturing from the Organization of American States (OAS) have brought nothing to Nicaraguans and Venezuelans, as they suffer under brutal, authoritarian regimes. “Democracy, human rights, security, and development” are the touted pillars of the OAS, the oldest and most prominent regional organization in the Western Hemisphere.

Whether OAS administrators believe their own words or not, the proof is in the pudding. Evidence has piled up since the founding in 1948, and it points to the fact that the OAS is little more than a lavish platform for government bureaucrats to pontificate.

Keep in mind that of the $80 million OAS budget, $50 million comes from U.S. taxpayers, more than 60 percent of the total, and the United States even gave $17 million extra in 2017. The OAS claims 35 nations as members, but the progressives there charge nations based on “capacity to pay,” in line with the Marxist dictum, “From each according to his ability, to each according to his needs.”

Still, 14 nations are delinquent, and Venezuela hasn’t paid her dues in many years.

Money Down the Drain

Not only does the lopsided OAS fail to halt human-rights and democracy crises in this part of the world, it has a penchant for exacerbating them. The Sandinistas of Nicaragua and Chavistas of Venezuela—socialist gangs that rule failed states—are acute examples.

In the case of Nicaragua, more than 400 people have died in recent months at the hands of the regime’s crackdown on dissent. The actual number is north of that, but documentation is difficult amid the chaos. Locals are hardly waiting around to be additional victims, and they are flooding into Costa Rica.

While the OAS has called for elections and denounced the murders from the Sandinistas, it needs to take a look in the mirror. The OAS was the very organization that aided now-President Daniel Ortega and the Sandinistas in their communist revolution that overthrew Anastasio Somoza in 1979.

This takeover, aided by ideologically driven foreigners, particularly the Cubans, condemned Nicaragua to decades of central planning and the economic hinterlands of Latin America. The people now have had enough, but the regime’s control of the economy is so great that there is precious little organized opposition.

The OAS has a working group on the crisis, but it will come to nothing. Despite Nicaragua being an OAS member, Ortega already has rejected the working group’s access to the Central American nation. Meanwhile, Human Rights Watch has documented that his Health Ministry is firing workers who dare to help those injured in protests.

This points to the OAS’s Achilles heel. According to the OAS charter, it has no power to either impose economic sanctions or initiate a military confrontation. In other words, the OAS is mostly talk, and if a nation’s rulers don’t want to play ball, there is little the OAS can do—aside from suspending that nation’s membership in the organization.

The suspension process leads us to Venezuela, perhaps the most notorious and diabolical crisis in the region. The rise of 21st-century socialism under Hugo Chávez and now Nicolás Maduro has been a train wreck and led to an exodus, the magnitude of which the Americas have not seen since the Cuban revolution under Fidel Castro.

In 2016, the OAS promoted a national “dialogue” with the deranged Chavistas. Maduro and his criminal lackeys enjoyed the opportunity to stall the opposition and pretended to care about democracy. Afterwards, the crisis only worsened and emigration rose.

You might be surprised to know that Venezuela is still an OAS member. Calls from Secretary of State Mike Pompeo and Vice President Mike Pence for Venezuela’s expulsion have thus far failed to garner the necessary two-thirds of members, with a slight majority of 19 nations favoring the move in June.

Not without irony, Maduro had already initiated Venezuela’s voluntary departure in 2017, which is set to take effect in 2019. If the OAS finally gets around to ejecting Venezuela, the move will have no effect and might even be seen as a badge of honor by the Chavistas, who decry the OAS as a tool of the American empire.

Suspension, as the OAS’s most meaningful punishment available, is a litmus test of the organization’s scruples. It has utilized this only twice, against Cuba in 1962 and Honduras in 2009, for two years.

In 2009, OAS members offered a place for communist Cuba to return, not that the Castros had reformed their murderous ways. Regardless, Raúl showed little interest, and Cuba remains a listed but pending member, almost a decade later.

For those of us who pay attention to regional organizations in the Americas such as the OAS, their proliferation is enough to make one go cross-eyed. These ineffectual organizations include Mercosur, CELAC, and UNASUR, among others. The Pacific Alliance of Chile, Colombia, Mexico, and Peru is one of the few that has had at least some success in promoting free trade and economic development.

One of the chief, underlying problems is that Latin America is plagued by militant socialists, and authoritarianism is their modus operandi. They will be reluctant, to say the least, when asked to promote transparency, open elections, and free speech and association. That’s just not in their wheelhouse.

Thus, any vote to impose punishment on egregious offenders, such as Venezuela and Nicaragua, is set to fail. Chávez used Venezuela’s oil wealth to buy off votes in the OAS and insulate himself from condemnation, turning the organization on its head. If the socialists don’t get their way, they throw a tantrum and start a new organization, which is precisely how UNASUR, based in Ecuador, came about.

Even if the OAS could be restructured to have greater enforcement capacity, the benefits of that remain doubtful. The socialist tendency has infected the OAS so much that even its purported successes give reason to pause. For example, a recent claim of success was in facilitating the “peace” deal with the FARC Marxist terrorists of Colombia. The deal’s proponents seem to forget that Colombians rejected it in an explicit referendum in 2016, since the deal offered amnesty and even guaranteed positions of power to the worst criminals.

Similarly, the OAS supervised the 2017 presidential election in Ecuador and described it as “transparent and correct.” The OAS even appointed the president of Ecuador’s electoral council to the OAS team of observers for other nations.

A mountain of evidence shows there was tampering with the election—including military interference—won by Lenin Moreno of the PAIS Alliance party, a socialist ally of Venezuela. A recent documentary, Propagandia, has compiled the many glaring problems that stole the election from Guillermo Lasso, who narrowly finished second on the CREO ticket. Cuban intellectual Carlos Montaner and the Inter-American Institute for Democracy, a U.S.-based nonprofit, also held a conference in Miami last year, titled Electoral Fraud in Ecuador.

That begs the question: Why is the United States funding this charade, and not only funding, it but bankrolling the majority of the money when there are more than 30 other members?

The time has come for the OAS to disband and leave Washington. As the Trump administration has alluded regarding trade, these multilateral organizations become havens for inefficiency, and the United States would be better off seeking bilateral deals and confronting rogue nations directly.