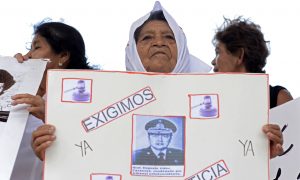 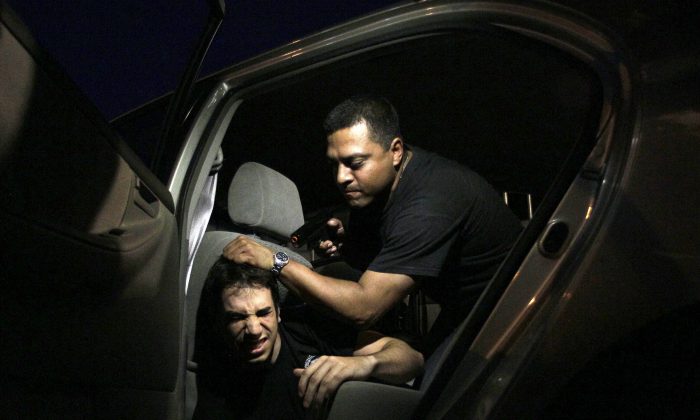 Two men participate in a kidnapping drill at the School of Personal Protection in an intensive self-defense course in Caracas, Venezuela, May 30, 2012. (AP Photo/Fernando Llano)
Americas

On a daily basis, people all over Latin America are victims of “express kidnapping”—they are taken and held hostage for an hour or several hours, while the kidnappers take their credit cards for a shopping spree, extort their families for money, and the like.

While kidnapping comes in various forms—including bride kidnapping, child abductions in custody disputes, or politically motivated kidnappings–in most cases kidnapping is about extortion. Simply put, most kidnappers are looking for money.

Kidnapping high-profile victims for large ransoms has long been a problem in many Latin American countries. But in more recent decades, criminal elements have found a new, highly profitable, and far less risky trade in express kidnapping.

Brazil, Colombia, Mexico, and Venezuela are four countries that are grappling most with this new scourge that affects both locals and foreigners.

In the 1990s, before express kidnapping emerged, there was a significant number of extended-period kidnapping cases in Rio de Janeiro. Frustrated with the situation, citizens—particularly from the business community, which was at greatest risk—applied pressure on authorities to address the problem.

As a result, government policies were delineated, harsher laws were passed, and law-enforcement did its job. Following in Rio’s footsteps, other states implemented similar policies to combat the crime. Many kidnapping rings were busted and the “kidnapping industry” was to a large extent broken.

By the end of the 1990s, there was a significant reduction in the number of kidnappings, at least the traditional form of kidnapping in which people are held for days with families forced to raise large sums of money for ransom.

A case in Brazil’s largest city, São Paulo, exemplifies how common express kidnapping by individual criminals or smaller groups has become. A couple was arrested for express kidnapping. The police published their photo around the neighborhood where they were caught, and the next day 11 other victims showed up at the police station to give testimony of their own experiences of express kidnapping at the hands of the couple.

One day, my father was leaving our garage in Niterói, just outside of Rio, with the car when two armed men stopped him and got into the backseat.

In the end, the couple was linked to at least 30 cases in a two-year period. The most common tactic used was this: one kidnapper held the victim at gunpoint in a vehicle while the other used the person’s bank card to withdraw money at ATMs or used the person’s credit cards to go on a shopping spree.

Sometimes express kidnapping happens for other reasons. One day, my father was leaving our garage in Niterói, just outside of Rio, with the car when two armed men stopped him and got into the backseat. They directed him to drive to a deserted place in Rio and left with the car. On the way there, he tried to engage them in conversation. One of the kidnappers told him, “We liked you, we won’t kill you. We need your car for a job. You will see it again.” The car was found by the police the next day. By what the kidnappers said and their “professional” behavior, their job suggested an assassination or drug deal.

We recognized the car only because of the license plate, as the car had been burned with two bodies inside.

My sister underwent a similar experience. The difference is that we found her car on the front page of a newspaper a few days later. We recognized the car only because of the license plate, as the car had been burned with two bodies inside.

Local police sources said that criminals can kidnap and free numerous people in the same night and can demand up to $50,000 in ransom, reported AFP. A private negotiator said that since the great devaluation of the local currency, the bolivar, ransom demands have been made in foreign currencies. Victims’ families are forced to gather their savings in dollars or euro, and only if the ransom surpasses $10,000 will the kidnappers agree to negotiate in bolivars.

Criminal lawyer Mario Mármol Gacía told AFP that kidnappings have increased more than 300 percent since 2009, and added, “Before criminals used to clone credit cards and attack armored trucks, but these operations aren’t profitable anymore and involve too great a risk. So, many gangs now prefer kidnapping.”

Victims’ families are forced to gather their savings in dollars or euro, and only if the ransom surpasses $10,000 will the kidnappers agree to negotiate in bolivars.

Venezuelan President Nicolás Maduro is trying hard to continue the populist policies of former leader Hugo Chávez, but the economic meltdown of Venezuela that started with Chávez is getting worse and worse. A general shortage of products, long lines to buy food, and high levels of unemployment has been accompanied by a growing number of homicides, kidnappings, and robberies.

One of the economic measures undertaken by Maduro’s government was to fix the dollar–bolivar exchange rate. To avoid losing money due to the fast devaluation of the bolivar, many people started looking for ways to buy foreign currency. Since most people have limited or no access to the official exchange market, a black market emerged and people started stock-piling dollars and euros at home. This became a great incentive for express kidnappings in Venezuela.

The Marxist guerrilla movement FARC—an acronym for “Revolutionary Armed Forces of Colombia” but today a synonym for narco-trafficking—has played a major role in making Colombia a center for kidnapping.

Some high-profile kidnapping cases became famous internationally, with hostages held for years. FARC exploited these opportunities as much as possible to promote its image and gain time via peace talks, while continuing its criminal and terrorist activities, reinforcing its ranks, rearming, and advancing its political agenda.

In spite of the gradual decline of common kidnapping, express kidnapping has risen in Colombia in recent years.

But this approach has also caused serious damage to the group’s image internationally. With the increased inflow of drug money—reaching an estimated $2.4 billion to $3.5 billion in 2014, according to remarks by Colombia’s defense minister last October—FARC has been reducing its dependence on kidnapping activities, while also avoiding unnecessary bad publicity and confrontations with stronger establishment forces.

In spite of the gradual decline of common kidnapping, express kidnapping has risen in Colombia in recent years.

It is difficult to gather precise numbers on express kidnapping in Colombia because many of the cases are recorded as robberies and many are not reported at all due to mistrust of security agencies or fear of retaliation by criminals. Nonetheless, Gen. Humberto Guatibonza, commander of the GAULA anti-kidnapping unit of the police, said guerrillas and common criminals have been increasingly turning to express kidnapping, reported El Colombiano.

Of the kidnappings recorded in 2013 and 2014 by Colombia’s Defense Ministry, there is a clear trend toward short periods of captivity with relatively small ransoms.

“Kidnapping for ransom is an established criminal activity in Mexico,” said a U.S. Bureau of Diplomatic Security report.

These kidnappings have normally been associated with organized crime, especially drug cartels and gangs, as a terror toll for revenge and blackmail, but also as a lucrative supplement to drug-trade income. Especially after the 1994 economic crisis that hit the country, large-scale drug-related and other crimes, including kidnappings, grew considerably.

Express kidnapping has surfaced as a viable option for disbanded ex-gang or cartel-members.

In the war on drugs, some cartel heads were killed or imprisoned; and with the rise of self-defense groups, some large criminal groups were demobilized.

Meanwhile, smaller, but no less violent, criminal elements have mushroomed.

Express kidnapping has surfaced as a viable option for disbanded ex-gang or cartel-members. The appeal, and hence danger, of this form of crime is that it’s easily accessible to common criminals as it doesn’t require much experience or preparation.

“The usual victim practice is not to notify police authorities, as the popular belief is that the police may be involved in the crime or are unable to resolve the situation,” stated the Bureau of Diplomatic Security report.

It also noted that foreigners are at high risk too, “Although there is no indication that U.S. citizens are being specifically targeted, they are frequent victims.”

The vast majority of express kidnappings targets the local population. But even with the small number of foreign victims, Latin American Travel Association (LATA) Chairman Byron Shirto wrote via email, “tourists to Latin America, like anywhere in the world, must be mindful of their security, [and] use common sense.”

He added that “huge improvements in public safety have been achieved and recorded positively over recent years especially in major cities.”

The law-enforcement community suggests a variety of preventative measures to avoid being kidnapped: avoid drawing attention to yourself by not wearing watches, expensive clothes, or carrying credit/bank cards; change your routes and routines regularly; stay alert at all times, especially when stopping at traffic lights and at night; avoid deserted places.

Of course, people don’t want to live a paranoid existence either. For people living in Latin America, following the recommendations would certainly lower the quality of life. It also serves to widen the social gap, with elite moving about in armored vehicles and surrounding themselves with security, while the rest of the population lives in fear.

So for Latin Americans, whatever the solution is to the challenges the region faces, nobody wants to live in stealth mode, while criminals rule the streets.