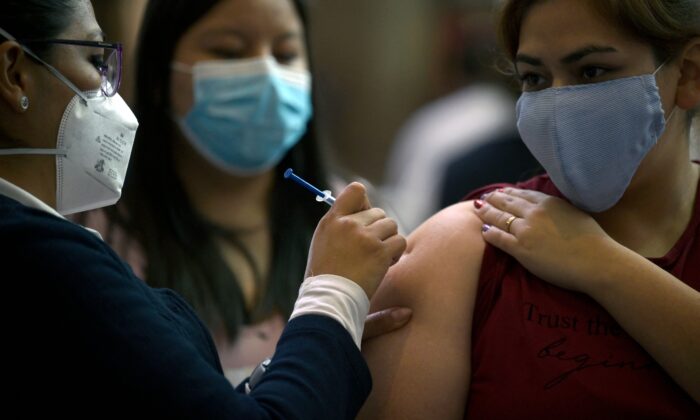 A young woman receives a first dose of the AstraZeneca vaccine against COVID-19 in Mexico City, on Aug. 10, 2021. (Alfredo Estrella/AFP via Getty Images)
Americas

SANTA CRUZ, Bolivia—Latin American response efforts to the Omicron variant of the CCP (Chinese Communist Party) virus have been erratic since the diagnosis of the first case in São Paulo on Nov. 23, 2021.

Countermeasures by governments range from tightening border and entry requirements, to vaccine mandates and talk of lockdowns, to completely nonchalant efforts and the dropping of entry restrictions entirely.

The virus that causes COVID-19 has reportedly killed 1.57 million people in Latin America and the Caribbean.

Case numbers and the newest variant aside, El Salvador became the first country in the world to drop all its virus-related entry requirements, on Nov. 17, 2021. On Jan. 3, the administration of President Nayib Bukele announced preparations for any rebound in CCP virus cases while asserting that the nation’s “robust public health system” had plenty of medical supplies and hospital beds.

Officials also said they had enough vaccine doses to immunize the entire population.

Health minister Francisco Alabi said the country is prepared to react in the best way with patient care and virus control.

Following a similar response track, Mexico announced the removal of all CCP virus-related entry requirements as of Jan. 1. Prior to the new year, travelers had to fill out an online health questionnaire before proceeding through immigration.

Meanwhile, the nation struggles to control a spike in virus cases, which peaked on Jan. 3.

Mexico, which became the second country to remove all CCP virus entry requirements, uses a four-color system that alerts residents to restrictions, with red designated as the highest level of control and only essential activities allowed. As of Jan. 17, none of the country’s 32 states were operating under red level restrictions.

Paraguayan Deputy Minister of Health Hernan Martinez said lockdown measures won’t return to the country, despite the arrival of Omicron within its borders on Dec. 28, 2021. Martinez says he doesn’t expect the new wave of infection to be as intense as previous ones, including fewer hospitalizations and deaths.

“In no sense are we going to return to restrictions or anything like that. The time has passed,” he said.

However, requirements for foreigners wanting to enter Paraguay changed on Jan. 10.

A negative PCR test no older than 72 hours now is required unless travelers are coming from a Mercosur trade bloc nation.

Proof of vaccination also is required from everyone who enters, unless arriving from a border city.

Uruguayan President Luis Lacalle Pou declared on Jan. 10 that his administration had no intention of closing the nation’s borders again, despite a record number of CCP virus cases posted that day by the World Health Organization.

Lacalle maintains that “the great defense” of Uruguay lies in its high rate of vaccination against the virus; over 77 percent are fully vaccinated.

Uruguay’s public health minister, Daniel Salinas, said it’s important to get the third dose to prevent severe cases of the disease and added that almost 43 percent of the population has already received the first “booster” inoculation.

“There’s a decoupling between the number of cases and hospitalizations,” Salinas said. “The concept that must be managed is functional control of the pandemic.”

At the other end of the response spectrum are countries such as Brazil, which not only made proof of vaccination against the virus mandatory to enter the country, it’s also required for admission to indoor venues in 19 states.

Additionally, a negative PCR test is required to enter Brazil.

In Bolivia, the government of socialist President Luis Arce attempted to enforce proof of vaccination on all residents and arriving visitors beginning on Jan. 1.

The mandate demanded proof of vaccination to enter any public area or place of commerce, which promptly triggered nationwide protests and lawsuits filed against the government in the nation’s constitutional court.

Arce’s government suspended the measure until the end of January, pending review, amid considerable social unrest and legal pressure.

Meanwhile, Chile suspended the relaxation of its strict border entry requirements on Nov. 29 because of the Omicron variant.

The nation, which has the highest vaccination rates in Latin America, also began administering a second booster dose this month.

Those looking to enter Chile must have proof of their vaccination registered by the nation’s government and obtain a “mobility pass.”

After obtaining the pass, travelers must also present a negative PCR test before arrival and then undergo a second PCR test after arrival and be quarantined until the results of the test are available.

Additionally, Chile is allowing people to enter only via airports in the cities of Iquique, Antofagasta, Santiago, and Punta Arenas.