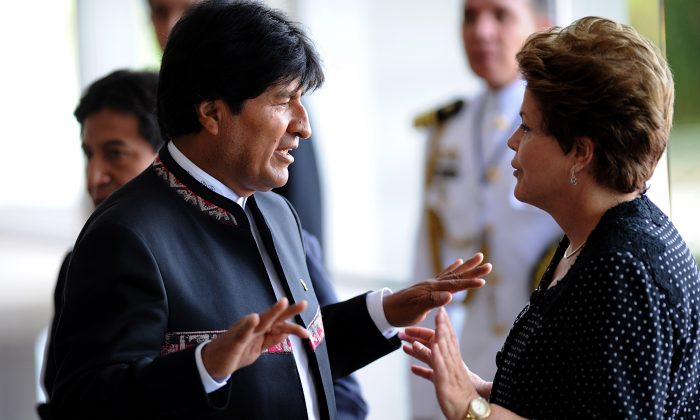 Brazilian President Dilma Rousseff (R) talks with her Bolivian counterpart Evo Morales as he arrives for the Summit of Heads of State of the Mercosur and Associated States in Brasília on Dec. 7, 2012. (Pedro Ladeira/AFP/Getty Images)
Opinion

Despite spying allegations, the United States is locked into partnership with its southern neighbors

The continent denounced the United States for extending its hemispheric supremacy to Europe, sputtered words like “colonialism” and “imperialism,” and claimed that the incident violated the Vienna Convention on Diplomatic Relations. Argentina’s President Cristina Kirchner called the incident “not only humiliating to a sister nation, but also for the whole South American continent.”

Fury continues with reports that the NSA allegedly hacked Web accounts of Brazil’s state-owned oil company—described as “industrial espionage” by President Dilma Rousseff—and monitored Internet and phone communications of Rousseff and Mexican President Enrique Peña Nieto while he was a candidate. Rousseff postponed a state visit to Washington, pending investigation, and with President Barack Obama waiting in the wings of the U.N. General Assembly for his turn at the podium, she tore into the United States for its “breach of international law.”

This may be a turning point in U.S. relations with its southern neighbors. While anti-American sentiment on the street, a result of a long history of domination, is real, the bedrock reality is that the United States and Latin America are joined at the hip, economically and demographically. Trade, investment and immigration data reveal growing relations and interdependence.

Rousseff’s suspending her trip to Washington is only the latest episode in a long history of turbulent relations with external powers. Simón Bolivar, the “Liberator of the South,” first proposed combatting European colonialism in South America in 1826. During the Cold War, the U.S. policy of containment led to military interventions in Central America and the Caribbean, and supported right-wing dictatorships in the Southern Cone. According to Amnesty International, hundreds of thousands were tortured, exiled, or “disappeared” by U.S.-backed military juntas in Chile, Argentina, and Guatemala.

The U.S. fear of communism spreading in the region was controlled through the Organization of American States. After the 9/11 attacks in New York and Washington, the Multidimensional Secretariat was established at the OAS to deal with transnational threats such as terrorism and organized crime. Hundreds of thousands more have lost their lives in Colombia, Mexico, and Honduras with the rise of organized crime in the region.

Until his death in March 2013, President Hugo Chávez of Venezuela spearheaded a group of eight nations under the Bolivarian Alliance of the Americas, ALBA, in an anti-imperialist movement that carries the banner of 21st century socialism. ALBA, led by Cuba and Venezuela against the Free Trade Area of the Americas headed by the United States, was born to counteract U.S. dominion in the region.

Soon after the NSA revelations began, left-wing governments in South America—Bolivia, Nicaragua, and Venezuela—made international headlines by offering asylum to Snowden. The whistle-blower’s plight is similar to that of WikiLeaks founder, Julian Assange, who has taken refuge in the Ecuadorian Embassy in London since June 2012.

On July 20, less than a month after the beginning of the Snowden affair, Venezuela’s President Nicolás Maduro took the opportunity to end conversations that had begun in June with U.S. Secretary of State John Kerry, stating, “My policy is zero tolerance to gringo aggression against Venezuela.” Talks to replace a U.S. ambassador in Caracas were abandoned yet again.

In Latin America, ALBA countries act as an axis of anti-American sentiment. In February 2013, the Ecuadoran Foreign Minister Ricardo Patiño called the OAS Inter-American Defense Board “useless,” suggesting that it was merely another arm of U.S. influence in the region. A month later, Ecuadoran President Rafael Correa stated in the inaugural address of the 22nd Summit of ALBA that its members “must create a shield against exploitation, a shield against neocolonialism.”

ALBA nations have established their own School of Sovereignty and Defense in Bolivia to keep U.S. imperialist intervention at bay. A main security argument is that drug trafficking is a problem for the United States and not necessarily a policy issue for South American countries.

It would follow that the strong, constant flows of trade, aid, and security cooperation between Latin America and the United States would dry up after so much tension. Nevertheless, the U.S. Census Bureau reports that trade remains stable for now, especially for oil producers like Venezuela and Bolivia. Anti-American sentiment in the region seems to be purely rhetorical, having little impact on trade relations with the United States.

The United States receives the largest percentage of Latin American exports from Venezuela, Ecuador, Nicaragua, and Honduras. In the case of Bolivia, it drops to second place after Brazil. Such significant flows of merchandise and capital will not stop overnight, no matter how many countries forced the Bolivian presidential plane to land for a few hours.

In much the same way, as reported by The New York Times, Latin American migration to the United States has reached equilibrium with new arrivals roughly equivalent to the number of people returning home. Americans are also picking countries as diverse as Mexico, Belize, Costa Rica, and Nicaragua to retire to, while recent trips to Mexico and Chile by the U.S. president and vice president emphasize education exchanges.

South America expresses its outrage through diplomacy. Consider, after Morales was allowed to return to La Paz, the diplomatic rumble escalated as members of the regional trading institution Mercosur called back their ambassadors in the countries that had denied the Bolivian president use of airspace. Ecuador joined them four days later, at which point Venezuela also officially removed ambassadors in Spain, France, Portugal, and Italy. An apology was issued July 25, and ambassadors from Bolivia, Venezuela, and Ecuador were reinstated to their offices in Paris, Rome, Madrid, and Lisbon two days later.

Concerns may run more deeply over reports of the United States monitoring communications of presidents and strategic industries. Brazil is the world’s sixth largest economy, and Rousseff may use the embarrassing disclosures to leverage the United States on trade, Internet regulation, and other priorities. With the FIFA World Cup and the Olympics coming up, Brazil will most likely use the situation as much-needed political capital at home, instead of attempting any change in relations with the United States beyond venting at the U.N. Rousseff cannot afford to risk an international snafu amid growing discontent over her actions concerning domestic policy.

Trade overrides ideology. Bottom line, left-wing leaders like Maduro and Morales need U.S. business in their economies, and the most vehement anti-imperialist talk is overshadowed by economic pragmatism. Ecuador is in an even more critical position, as reliance on the U.S. dollar in its economy means it cannot afford poor relations with the United States. Ideological hot air may grab headlines, but will not trump Latin America’s heavy flows of trade with the world´s most powerful economy.