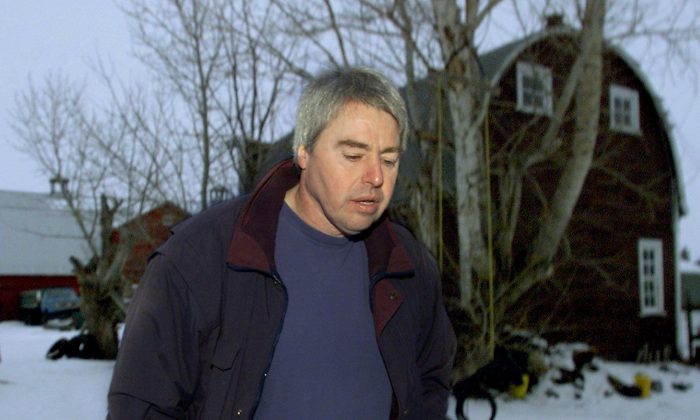 Robert Latimer walks on his farm near Wilkie, Sask., after speaking to reporters in January 2001. Latimer is seeking to overturn a parole board decision that makes it onerous for him to travel internationally. (CP PHOTO/Kevin Frayer)
Canada

Latimer Seeks to Overturn Parole Board Ban on International Travel

VANCOUVER—For more than 20 years—on bail, in prison, on parole—Robert Latimer has followed every rule and condition imposed upon him, without transgression, his lawyer told a Federal Court judge on Wednesday.

Jason Gratl asked the court to overturn a parole board decision that bars Latimer from travelling outside Canada without express permission, saying it is an unreasonable limitation on the Saskatchewan farmer who was convicted of second-degree murder in the death of his severely disabled daughter.

Latimer, 60, killed 12-year-old Tracy in 1993 by piping exhaust into the cab of his truck on the family farm in Wilkie, Sask. She suffered from severe cerebral palsy and Latimer has always maintained he wanted to end her chronic, excruciating pain.

A 1994 conviction was overturned by the Supreme Court of Canada, but he was convicted again in 1997. Latimer was sentenced to mandatory life in prison with no chance of parole for 10 years, despite a jury recommendation for less.

He was released on full parole, with conditions, in 2010. In July 2013, a parole board panel denied Latimer’s request to travel freely outside Canada without having to apply first for a limited-time passport.

Latimer, who did not attend the brief hearing in Vancouver, applied to the Federal Court for a judicial review of that decision.

Chris Bernier, the lawyer for the federal Crown, said Latimer can apply on a case-by-case basis for permission to travel. That restriction is absolutely reasonable, he said.

“This is a life sentence for murder that he’s still serving,” Bernier said.

The parole board recognized that Latimer poses no risk to reoffend but they took into account the severity and nature of his offence, he told the judge.

“He’s still able to travel,” Bernier said. “He would need to provide information on the place, purpose and duration of his travel. I don’t think that’s unduly onerous for him to provide that information.”

Last year, the board gave Latimer permission to attend a debate on assisted suicide and mercy killings in Britain, but United Kingdom Border Services denied him a visa.

He tried to apply to travel to South America to do some work with Habitat for Humanity, but that also fell through.

The judge reserved his decision. If successful, the parole decision will be sent back to the board to reconsider.