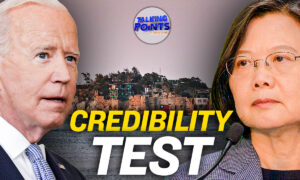 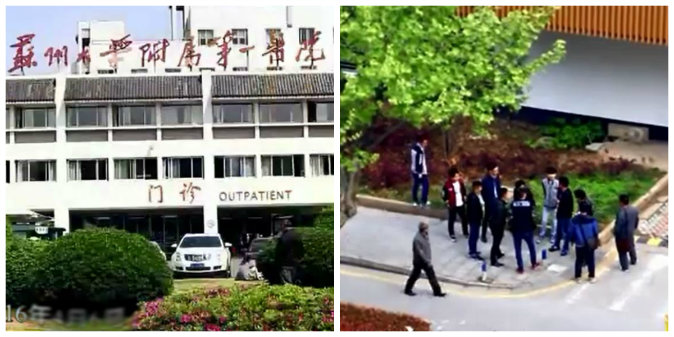 (L-R) First Affiliated Hospital of Soochow University and members of a gang controlling the blood donation at the hospital. (Qilu Evening News)
China

Knife-wielding gangs are clashing outside hospitals and spilling each other’s blood in China over a precious resource—blood donations.

“Those who operate here must know how to fight, you got that?” said Xiao Su, standing outside the First Affiliated Hospital of Soochow University, in Jiangsu Province, recently.

Xiao is a foot soldier in a gang that controls the blood trade at two hospitals in China. These groups thrive because of China’s vague regulations on blood donations, which have incentivized a violent shadow industry.

Because blood donations are extremely low in China—a lack of social trust is a major reason—there is a law that mandates who gets a blood transfusion. It says that if a patient is able to present a certificate showing that they have encouraged friends and family to donate, they’re able to get blood. But it’s not always easy to convince loved ones to donate.

That’s where the gangs step in.

The scheme works like this: The gangs advertise payments for blood donations online. They shepherd willing members of the public through the process, providing the patient’s personal information for the certificate, and pose as friends or family as they go to the hospital. They receive their payoff, and the gang then sells the certificate to the patient in need of the transfusion.

The business is so lucrative that these gangs have cropped up, each controlling their own piece of turf, typically around the donations and blood certificates in one hospital or area.

“Look at my boss over there, he’s got muscles all over his body. He works out everyday,” said Xiao Su to the reporter from Qilu Evening News. Xiao Su works for Mr. Zhou, a blood trafficking gang boss.

Squatting on the pavement with his bowl haircut and black biker jacket, Xiao told the news station he had gotten into a knife fight “right here” less than a week after he started working for Mr. Zhou. “This business is built on bloody fights.”

The Zhou gang generates its wealth by abusing China’s blood donation legislation, which has an article that encourages the family or friends of hospital patients to donate blood for a certificate in a mutual aid donation scheme.

Because Chinese hospitals are perennially short of blood—the state-run China Daily claims that there were 9.4 donations per thousand people in 2014 in China, lesser than the 11.7 to 36.8 donations per thousand for middle to high-income countries, according to statistics from the World Health Organization—and because hospitals cannot easily verify a donor’s actual relationship to a patient, black markets ran by blood trafficking syndicates are able to thrive.

And Soochow University’s First Affiliated Hospital has a policy that unwittingly props the black market operated by Mr. Zhou and two other gang bosses—the hospital will only provide blood from its bank to patients who require emergency treatment, and requires all patients in non-life threatening conditions to use the mutual blood donation scheme.

The blood trafficking syndicates work through social media or direct solicitation, according to Qilu Evening News.

A typical blood donation advertisement posted to the popular Chinese messaging service WeChat reads: “Looking for blood donors, with compensation of 200 yuan for 200cc, and 400 yuan and a gift worth 100 yuan for 400 cc. The donor must be at least 18 years of age. Male donors must weigh at least 115 pounds, and female donors must weigh at least 104 pounds. Arms must be free of needle marks.” A telephone number is listed at the end of the ad.

Xiao Su the gang lackey told Qilu Evening News that he had recently broached a man at Suzhou’s Red Cross blood donation center and got him to make a mutual aid donation. The doctor at the hospital didn’t take any steps to verify the man’s relationship to the patient who he was donating blood to before issuing a certificate.

Blood gangs turf wars are not limited to the coastal province of Jiangsu. In 2013, four gang members were handed prison terms when two rival syndicates violently clashed outside Jishuitan Hospital in Beijing, according to Chinese news portal Netease.

The Chinese regime’s health ministry has tried to curb the blood trade by capping the amount of mutual aid donation blood a hospital can store, while the local authorities in the city of Wuhan have banned mutual aid donations altogether, according to Caixin, a respected business magazine.

But the black market for blood donations isn’t likely to collapse in the near future because Chinese citizens are generally unenthusiastic about donating blood, the consequence of a number of high-profile scandals in recent decades.

In the 1980s and 1990s, Chinese regime health officials encouraged farmers to sell their blood and plasma to hospitals or blood banks, but owing to the unsanitary manner in which the procedure was carried out, hundreds of thousands were inflicted with HIV—an estimated 500,000 to 700,000 people were affected in Henan Province alone, according to human rights website Canyu.org.

The Guo Meimei scandal in 2011 also affected the Red Cross Society of China’s efforts to collect blood. Guo, a young socialite who posted pictures of her extravagant living in the internet, had claimed to be a Red Cross manager on her social media account. The scandal caused the Chinese people to distrust the Red Cross and not support its initiatives.