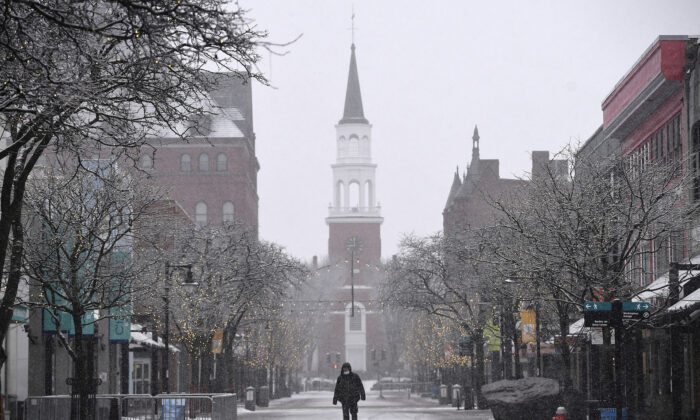 A man walks through Church Street Marketplace during a snowstorm in Burlington, Vt., on March 12, 2022. (Jessica Hill/AP Photo)
US News

A late winter storm blasted the northeastern United States on Saturday with high winds and snow that could pile up to a foot high, sending temperatures plummeting and making travel hazardous after first taking aim at the Deep South.

The National Weather Service said 7 to 12 inches could be expected in northern areas of Pennsylvania and New York with winds gusting as high as 45 mph. Philadelphia residents, while expecting only a few inches of snow, were warned that blizzard-like conditions were possible at one point, and later a flash freeze was possible with wet surfaces rapidly becoming icy due to plummeting temperatures.

Gale warnings were in effect in coastal New Jersey and Delaware areas, with gusts of 40 to 50 mph possible and forecasters warning of tree damage and resulting power outages as well as rough boating conditions. A wind advisory was in effect for other areas.

Meteorologist Andrew Orrison of the weather service office in College Park, Maryland, said moderate to heavy snow had fallen over “a rather large area” of the eastern United States, but the storm was moving quickly to the northeast.

Intensifying low pressure accompanying the storm had been generating high winds, and plunging temperatures would freeze any moisture on roadways, making for hazardous travel in icy conditions, he said.

State police said Saturday afternoon that a crash involving 73 vehicles on a central Pennsylvania highway had resulted in multiple injuries, but no life-threatening injuries were immediately reported. Trooper Megan Ammerman said the crash was reported shortly after 2 p.m. Saturday on PA 581 in Cumberland County.

The cause of the crash and other details weren’t immediately available. WCAU-TV reported that temperatures in the area ranged from the lower to mid-20s, well below freezing, with winds gusting to 30 to 40 mph resulting in reduced visibility.

Slick roads were also blamed for crashes as rain turned to snow and began to pile up in parts of Maine, northern New Hampshire and Vermont. New Hampshire State Police responded to multiple crashes involving cars sliding off snowy roads, prompting warnings to slow down. In Vermont, where as much as 14 inches of snow was expected, officials warned that potential blizzard conditions and blowing snow could make travel “difficult to impossible.”

PPL reported more than 10,750 customers without power in eastern and central Pennsylvania by mid-afternoon Saturday but that had dropped to 5,000 hours later. FirstEnergy reported 10,350 customer outages in Pennsylvania and New York but that had been reduced to 7,650 later in the day.

The system also brought snow and rain to several Southern states, including Alabama, Georgia, Louisiana, and Mississippi, on Friday and Saturday. Parts of northern Mississippi and portions of the Mississippi Delta also saw between 2 and 3.5 inches of snow.

Several inches of snow fell in eastern Tennessee, delaying by at least a day the season opening of Dollywood in Pigeon Forge. In Knoxville, the annual St. Patrick’s Day Parade was canceled and several inches of snow in the middle of the state contributed to multiple crashes on interstate highways.

A number of St. Patrick’s Day parades were postponed elsewhere, including events scheduled in Albany, New York, and Erie and Scranton, Pennsylvania, as well as suburban Philadelphia. The parade scheduled Sunday in the city of Philadelphia was still scheduled to go on. The holiday falls on Thursday this year.