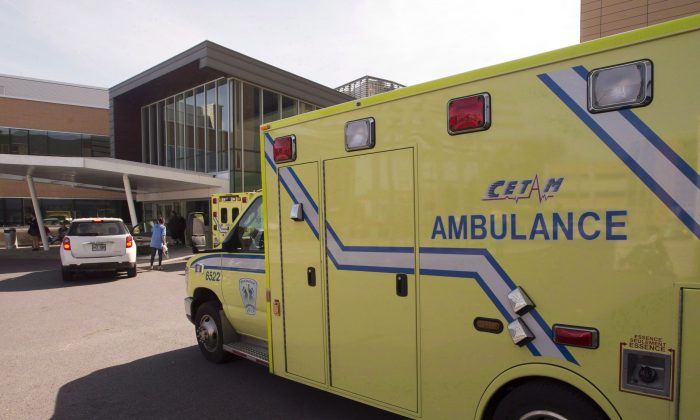 An ambulance drives up to a hospital in Longueuill, Quebec. Health care and social service workers are appealing to Ottawa to restore health coverage for all refugees and refugee claimants. (The Canadian Press/Ryan Remiorz)
Business & Economy

Stocks had traded solidly higher for most of the day, as banks, insurance companies and brokerage firms climbed after Federal Reserve Chair Janet Yellen said that the policymakers would likely raise interest rates this year. The market gave up its most of its gains in the afternoon as a sell-off in drugmakers led the health care sector lower.

The stock market has been volatile for the past six weeks on worries about the impact of slowing growth in China and other emerging markets, as well as uncertainty about the outlook for interest rates. The late sell-off on Friday pushed stocks to their third losing week in the last four.

“This is a dangerous market that is still looking for direction,” said Jerry Braakman, Chief Investment Officer at First American Trust an investment management firm. “Although the U.S. is continuing to improve, outside the U.S., it’s just scary.”

Shares of drugmakers began their slide on Monday when Democratic presidential front-runner Hillary Rodham Clinton pledged to stop “price gouging” in the industry. The health care sector, a longtime favorite of investors, ended the week with its worst weekly performance in more than four years.

Biotechnology shares in the S&P 500 dropped plunged during the week, pushing the overall health care index down 5.8 percent, its worst week since August 2011. Vertex Pharmaceuticals, which focuses on developing drugs for cystic fibrosis and viral infections, was the biggest decliner in the index on Friday, dropping $7.83, or 7 percent, to $103.20.

The market had started the day with solid gains as investors were encouraged by a report that showed U.S. economic growth was faster in the spring than previously estimated.

The U.S. economy expanded at an annual rate of 3.9 percent in the April-June quarter, up from a previous estimate of 3.7 percent, the Commerce Department reported Friday. The strength came from gains in consumer spending, business investment and residential construction.

Financial companies got a boost after Federal Reserve Chair Janet Yellen said that the central bank was still likely to raise interest rates this year. She suggested global economic weakness won’t be significant enough to alter the central bank’s plan to raise its key short-term rate from zero by December. Record low interest rates since the 2008 global financial crisis have been a boon for stocks, underpinning a bull market that has run for six and a half years.

The combination of higher rates and a growing economy is good for financial companies. That’s because they can earn more from making loans. Citigroup rose $1.42, or 2.9 percent, to $50.55 and Bank of America climbed 34 cents, or 2.2 percent, to $15.89.

“The financials are a wonderful place to be over the next several quarters if a rate rises materializes,” said Jim Russell, a portfolio manager at Bahl & Gaynor Investment Counsel.

Nike was biggest gainer in the S&P 500 on Friday. The stock soared after the company’s earnings surpassed analyst expectations. Nike climbed $10.21, or 8.9 percent, to $125.

Volkswagen shares fell again. The company named Matthias Mueller, the head of the group’s Porsche unit, to be the new CEO. His predecessor Martin Winterkorn quit the job this week over the emissions scandal, which has tarnished the company’s reputation. VW shares ended down 2.8 percent on Friday and dropped almost 30 percent for the week.