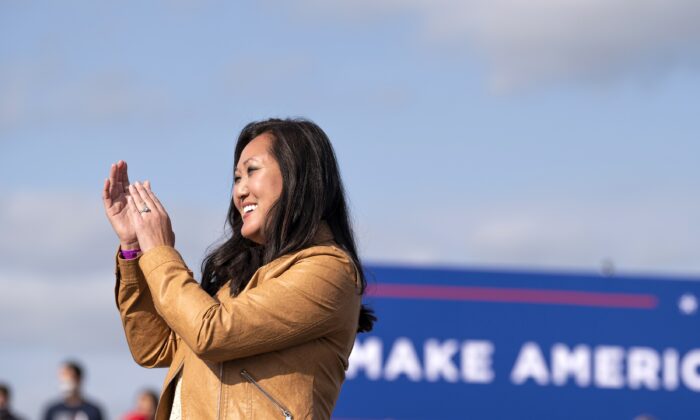 “I am used to campaigning in southern Minnesota with my husband, but I know he is looking down on me today and is proud to see I am keeping my promise to run for his seat and to complete his term in Congress,” Carnahan, a former chairwoman of the Minnesota Republican Party, said in a statement.

Rep. Jim Hagedorn (R-Minn.) died at age 59 about one month before Carnahan officially launched her bid.

Hagedorn, whose cause of death has not been confirmed, was in the middle of his second term representing Minnesota’s 1st Congressional District.

The winner of an upcoming special election will serve in Congress until January 2021, unless they win the next regular election in November.

Carnahan said that her husband’s dying wish was for her to run to replace him.

“In the final weeks before his passing, Jim told me to keep forging ahead, to keep reaching my dreams, and to win this seat,” she said.

At least half a dozen other candidates have announced bids for the special election, including Richard Painter, a Democrat who once was the chief White House ethics lawyer while George W. Bush was president.

The Republican primary will include Minnesota state Rep. Jeremy Munson.

The primaries are set for May 24 and the special election will be held on Aug. 9.

Carnahan resigned from heading the Minnesota GOP in 2021 after Anton Lazarro, a Republican strategist, was arrested on child sex trafficking charges. Gisela Castro Medina, who was chairwoman of the Minnesota College Republicans chapter at the University of St. Thomas College, was charged around the same time.

Carnahan said she had “no knowledge or involvement” in the alleged activities.

“It is unfortunate that the mob mentality has come out in this way to defame, tarnish, and attempt to ruin my personal and professional reputation. I am confident a full investigation will uncover the facts and prove my innocence,” she said at the time. “However, I signed up for this party to help us elect Republicans and I want to ensure we can continue to do that. At this point, it’s in the best interest of the party and my mental health to resign from my position as chairwoman … and step away from the party.”