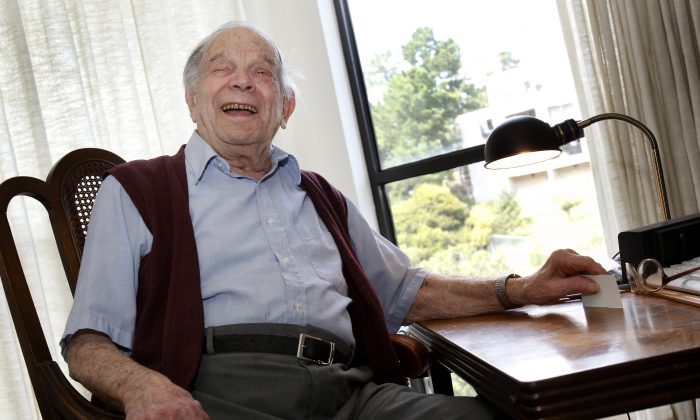 Bill Del Monte smiles at his home in Greenbrae, Calif., on April 13, 2011. Bill Del Monte was born shortly before the San Francisco earthquake of 1906 and was one of the youngest to survive. William A. “Bill” Del Monte died at a retirement home in Marin County on Jan. 11, 2016. He was 11 days shy of his 110th birthday. (Brant Ward/San Francisco Chronicle via AP)
HK Life

SAN FRANCISCO—The last survivor of the devastating San Francisco earthquake and fire of 1906 has died, a relative confirmed Monday.

William A. “Bill” Del Monte died at a retirement home in nearby Marin County on Monday. He was 11 days shy of his 110th birthday. His niece, Janette Barroca of San Francisco confirmed his death of natural causes.

Del Monte was just three months old when the quake struck, forcing his family into the streets to escape in a horse-drawn buck board with fire burning on both sides, Barroca said. The family crossed the bay to Alameda County but eventually came back to the city after the home was rebuilt, Barroca said.

His father had opened the famous Fior d’Italia on Broadway in 1886 and it was destroyed in the quake but reopened in a tent not long after. By 1915 the Italian restaurant was prospering again, according to a 2011 San Francisco Chronicle story.

Del Monte attended San Francisco schools and after graduation went to work briefly for his father at his North Beach restaurant. But even in his teens he was interested in playing the stock market. And he was good at it. By 1929 at age 23, he was worth a million dollars, according to the San Francisco Chronicle story.

He lost the money but around the same time he gained a wife: a knockout known as Vera Minetti. They eloped to Reno in 1925 and were married for more than 55 years before she died in 1991. They never had children. While his true passion was playing the stocks, he also ran a San Francisco Bay Area theater for years.

Del Monte’s death leaves a void in the city’s history.

Ruth Newman was the oldest remaining survivor of the earthquake before her death last summer. She was 113.

Newman was 4 years old when the quake struck in the early morning of April 18, 1906. She died July 29 at her home in Pebble Beach, California, the coastal town where she and her late husband moved to after living in nearby Pacific Grove, said her daughter Beverly Dodds.

Newman never attended the annual earthquake commemorations events in San Francisco, which include gatherings at Lotta’s Fountain in downtown before dawn, because she preferred to sleep in rather than rise before dawn to attend, her daughter said.

But Del Monte did over the years. In 2010 he was the only survivor who made it to Lotta’s Fountain, riding in the back of the city’s big black, 1930 Lincoln convertible.

More than 1,000 people were killed in the earthquake and fires. According to the U.S. Geological Survey, measurements of the quake have ranged from magnitude 7.7 to 8.3.

“The common thread I would draw with all of these survivors is they had a unique, dry wry sense of humor as anyone would have at being so rudely tossed out of bed at 5:11 in the morning,” said organizer Lee Housekeeper. “But none could compare to Bill. He had absolutely the sharpest mind of anybody I’ve ever known. A sharp mind, a sharp sense of humor and he was a complete flirt. My guess is there are a lot of heartbroken nurses out there today.”